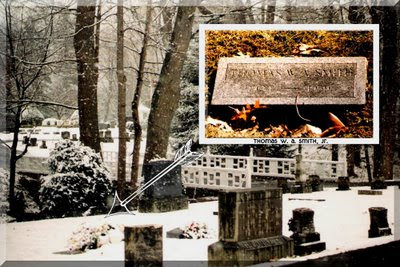 Lynn, Massachusetts. 26th Oct 1959. Thomas W.A. Smith, 55, of 159-A Essex Street, a clerk in the Boston & Maine Railroad passenger department in the North Station, Boston, died yesterday at home after a long illness. He had been employed by the B&M for 26 years. A native of Biddeford, Me., Mr. Smith had lived in Lynn for the past 35 years. He was a member of the International Brotherhood of Railway & Steamship Clerks. He leaves his wife, Mrs. Barbara M. (Watson) Smith, a daughter, Mrs. Marjorie V. Trecartin of Lynn, and a granddaughter. Services will be held on Wednesday at 2 PM at Mr. Smith's residence. Cremation will follow in Harmony Grove Cemetery, Salem. The ashes will be buried in Laurel Hill Cemetery, Saco, Me.

If you click on the album cover to your left, you will be taken to a photo album containing photos of Unkie Tom and his family. Tom was the only brother / sibling of Elizabeth (1912-1932), my maternal grandma. I was seven and living in Texas when he died in Massachusetts, and I never met him. Mom remembered her Unkie Tom from when she was a kid living in Massachusetts in the 1930s, before going to Texas (the state of her father's birth) circa 1939 to live her paternal grandparents. I have recently renewed acquaintances with some of Tom's grandchildren by way of our facebook accounts, after first finding one of his great-grand-daughters (quite by accident) at myspace. As you may have noticed by now, I tend to use whatever means available to further my genealogy outreach -- myspace, facebook, twitter, blogger, findagrave, picasa photo albums, proboards, et al. Whatever it takes, right?!?

Awesome. Just amazing. You are persistent--which is a GREAT thing!

Thank y'all! The name "Unkie Tom" came from my Mom's brother's baby book, in which Elizabeth (their mother) wrote that Robert received $5 from his "Unkie" Tom for his 1st birthday on 21st May 1931.