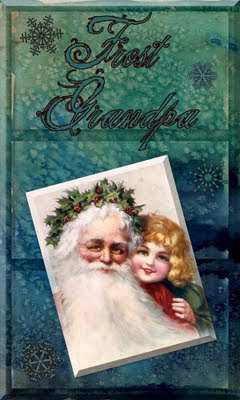 Randy Seaver's theme for this week's Saturday Night Genealogy Fun is to introduce geneabloggers to our ancestor with the Most Unique Ancestral Name.


I guess I'm kinda like Thomas on this one -- the names in my tree are so familiar to me that I'm not even seeing anything unusual about them anymore. But since I've been working on a Christmas project this weekend, there is one name that stood out for me last night.


Grandpa Frost (the OTHER one) -- aka Grandfather Frost or Father Frost -- is sorta the equivalent of Santa Claus in Russia -- AND he works with his granddaughter, Snow Maiden, so it's a family affair.


And since my Grandpa Frost's first name is Nicholas, that of course brings to mind good ole St. Nick aka Santa Clause aka Sinterklaas . . .


I found excerpts from Newdick's Season of Frost: an interrupted biography of Robert Frost while searching on Google Books. Regarding Nicholas Frost :-

The founder of Robert Frost's line in America was the Puritan, Nicholas Frost, who may have been on the lower coast of Maine as early as 1632, but who certainly landed with his Devonshire wife, Bertha Cadwalla Frost (b. 1610) and his two sons, John and Charles [ancestor of Robert Frost] -- from "ye Shipp Wulfrana. Alwin Wellborn, Master from Plimouth, Devon" -- in June, 1634, at Little Harbor, now Rye, New Hampshire. After his daughter, Anna, was born there in April, 1636, Nicholas pushed up to the head of Sturgeon Creek, acquired a goodly acreage of land, and settled for life in what is now Eliot, Maine. Despite the fact that he was illiterate -- he signed a petition to Oliver Cromwell with his mark, a combination of N and F -- he served as one of old Kittery's first selectmen.


On July 4, 1650, his wife and daughter were captured by Indians according to Norman S. Frost, whose Frost Genealogy in Five Families, together with Everett A. Stackpole's Old Kittery and Her Families, is the authoritative work on the genealogy of the Frosts on this side of the Atlantic -- "and taken to a camp at the mouth of Sturgeon Creek. Nicholas and his son, Charles, were at York at the time, and on their return, attempted to rescue them, but were unsuccessful. Charles, however, killed a chief and a brave. The next day Charles, his father, and some of the neighbors went back to the camp but were too late. The camp was deserted, only the bodies of Bertha and Anna were found there."


I cannot help but wonder . . . did my Grandpa or Grandma Frost ever stop to consider how their lives might have turned out if they had travelled down The Road Not Taken instead of, e.g., leaving home and family in 17th century England and sailing on a ship to an unknown land . . .

Wow...what a thought. If only one could go back and do things differently.

What a fascinating true story. Thank you so much for sharing your family's stories. I find them to be very absorbing.

Blessings to you, dear one.

These are my relatives,too, so I guess that makes us cousins.
Charles Frost's daughter, Lydia, was my very great grandmother (11 generations). Charles was a fascinating man and I have been researching the Frost family for some time now. I live in Maine, not far from where they lived. I'd love to chat more about it sometime.

Beth, I do so enjoy your little visits. Hope your sister is feeling better today.

Carla, Mom and I have been to Maine a few times, but not since 1998. We hope to visit the area again sometime. I just love finding my assorted New England connections. That line of my family history yielded my 1st success stories.

Merry Christmas to y'all! V.

That was a fun read. I am a descendant of Ncholas Frost also. Our last Frost son settled in Wilmington, NC. I have quite a different story to tell about the "hostile ambush of July 4th".

A long time ago I struck up a corespondance with John Frost, author of The Nicholas Frost Famiy (1943). I managed to visit ancient graves and heard a side of the story that made me cringe!

The male native American tribe members were slaughterd at a "mock battle". The colonists did not kill or mame native women or children, though. Surviving natives limped and dragged tribe members back to safety, but the surviving braves and male elders were ANGRY because of the betrayal. The natives planned their attack, but spared the women and children. Like returns like. When the colonist womenfolk buried their dead, however, real psychological warfare erupted. It's a fairly long story.

I'm writing because I feel it's important to remember that there is always more than one side of a story. Our colonist forefather, Maj. Charles Frost, was no angel. The indigenous people were viciously attacked FIRST. The indian attack of the colonist party returning from town functions that day was a matter of local justice. The women were not touched,--just as the colonists did not kill native women and children during THEIR ambush...the colonist men, on the other hand, were chased down and killed. It was NOTHING compared to the psychological warfare between the survivng native women and the surviving colonist women. A story our distant cousin, Robert Frost, failed to tell,--for what it's worth...

Sorry...not very Christmasy,--but I thought you might like another way of looking at the "ambush" story...Merry merry...

On July 4, 1650, 19 year old Charles Frost's mother and sister, Anna, were captured by Indians and taken to a camp at the mouth of Sturgeon Creek. His father, Nicholas and Charles, were at York at the time, and on their return,attempted to rescue them,but were unsuccessful. Charles, however, killed a chief and a brave. The next day Charles, his father, and some of the neighbors went back to the camp but were too late. The camp was deserted, only the bodies of his mother, (Bertha Cadwalla Frost)and Anna were found.

This is when the war with Charles Frost against the Indians really started. Although I am not saying that the "mock battle" was a disgrace, Charles Frost fought for his country and for his mother and sister's memory.

Interestingly enough, he was killed at Ambush Rock in Eliot on the 47th anniversary of his mother and sister's deaths. It is said that Maj. Charles Frost's blood was the last blood shed in King Philip's War.

Another family member here.....down the line of Major Charles Frost, his daughter Sarah and so on...I have just recently been digging into this and I am amazed at what I have found. thank you for sharing. this was more than I have found so far.