On this date in our family history . . . the 22nd day of May . . . in the year 1700 . . . Zachariah Goodale marries Elizabeth Cousins in Wells, York County, Maine . . . this Zachariah and Elizabeth are 8th great-grandparents to the Keeper of this family history blog . . . 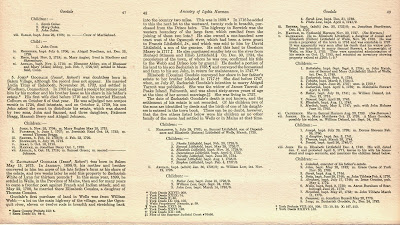 
Walter Goodwin Davis tells of this couple in his Ancestry of Lydia Harmon . . .


Zachariah Goodale was born in Salem May 15, 1675. In January 1698/9, his mother and brother conveyed to him ten acres of his late father's farm as his share of the estate, and two weeks later, he sold this property to Zachariah White of Lynn for thirteen pounds. In this same year, 1699, he settled in Wells, in the Province of Maine, then and for many years to come a frontier post against French and Indian attack, and on May 22, 1700, he married Elizabeth Cousins, a daughter of Thomas Cousins.

Goodale's first purchase of land in Wells was from William Webb -- a lot on the main highway of the village, near the Ogunquit river, eleven or twelve rods in breadth and stretching back into the country two miles. This was in 1699. In 1716 he added to this the next lot to the westward, twenty rods in breadth, purchased from the Drisco heirs. The highway to Berwick was the western boundary of the large farm which resulted from the joining of these two lots. He also owned a one-hundred acre tract west if the Ogunquit river, which had been a town grant to Francis Littlefield, Jr., and which was sold to him by David Littlefield, a son of the grantee. He sold this land to Gershom Maxey in 1717. He also purchased smaller lots on the river from Richard Stimson and Eliab Littlefield. On Dec. 30, 1734, the proprietors of the town, of whom he was one, confirmed his title to the Webb and Drisco lots by grant. He deeded a portion of his land to his son Zachariah in 1735, and conveyed the homestead and farm to his son John, in return for maintenance, in 1747.

Elizabeth (Cousins) Goodale conveyed her share in her father's estate to her brother Ichabod in 1717. She died before 1747, when, on 27 July, Zachariah Goodale's intention to marry Abigail Tarrott was published. She was the widow of James Tarrott of Peaks island, Falmouth, and was about sixty-seven years of age at the time of her second marriage. She was living in 1757.
The date of Zachariah Goodale's death is not known, and the settlement of his estate is not recorded. . . .