Posted by BeNotForgot at Wednesday, April 30, 2008 No comments:


Old Eliot
A Monthly Magazine of the History and Biography
of the Upper Parish of Kittery, Now Eliot:

Order of the Garter

Flags of the World, Past and Present
Their Story and Associations
By William John Gordon, Frederick Edward Hulme, W J Stokoe

Memorials of the Order of the Garter,
from Its Foundation to the Present Time
Including the History of the Order;
Biographical Notices of the Knights
in the Reigns of Edward III. and Richard II.,
the Chronological Succession of the Members ...
By George Frederick Beltz


On or about this date in our family history . . . the 22nd day of April . . . in the year 1741 . . . probably in Hanover County, Virginia . . . Elizabeth Clark becomes the bride of Joseph Anthony . . . Elizabeth and Joseph are 2nd great-grandparents of our Josephine (2nd great-grandma of the Keeper of this family history blog) . . . as well as her sister, Margaret Frances Antony nee Davis (1833-1912) . . . Elizabeth and Joseph are also great-grandparents of Dr. Milton Antony, Jr. (1824-1885), husband of the aforementioned Margaret . . . which means Margaret and Milton were 1st cousins once removed . . . this Dr. Antony was Rockdale Postmaster 1876-1877 . . . and Milton and Margaret's son, Edwin L. Antony, was Milam County Prosecuting Attorney 1876-1878, and was a member of the U.S. House of Representatives . . . Dr. Antony's father, and grandson of Elizabeth and Joseph, was Dr, Milton Antony, Sr., who founded the Medical College of Georgia . . .


P.S. . . . this Elizabeth is a sister to Agnes Clark . . . who married Benjamin Johnston . . . and Agnes and Benjamin are 2nd great-grandparents to Samuel Langhorne Clemens . . . which makes Mark Twain a fourth cousin four times removed to the Keeper of this family history blog . . .

Posted by BeNotForgot at Monday, April 21, 2008 No comments:

Posted by BeNotForgot at Friday, April 11, 2008 No comments:

A History of Texas and Texans
By Francis White Johnson, Ernest William Winkler: 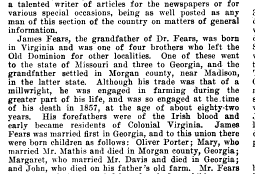 James Fears, the grandfather of Dr. Fears, was born in Virginia and was one of four brothers who left the Old Dominion for other localities. One of these went to the state of Missouri and three to Georgia, and the grandfather settled in Morgan county, near Madison, in the latter state. Although his trade was that of a millwright, he was engaged in farming during the greater part of his life, and was so engaged at the time of his death in 1857, at the age of about eighty-two years. His forefathers were of the Irish blood and early became residents of Colonial Virginia. James Fears was married first in Georgia, and to this union there were born children as follows: Oliver Porter; Mary, who married Mr. Mathis [sic -- Matthews] and died in Morgan county, Georgia; Margaret [sic -- America], who married Mr. (Milton Grant) Davis and died in Georgia; and John, who died on his father's old farm. Mr. Fears was a second time married but they had no children.


American State Trials
A Collection of the Important and Interesting Criminal Trials
which Have Taken Place in the United States
from the Beginning of Our Government
to the Present Day
By John Davison Lawson, Robert Lorenzo Howard: According to our Henry family tradition, it is said that some members of the James Gang stopped at the Henry property in Milam County to water their horses . . . our Henry family had arrived in Rockdale in the mid-1870s, and settled on land just north of town . . . it seems quite plausible there is some truth to this family tradition . . . and posted HERE is a report from another Milam County resident about the James Gang being in Rockdale c. 1880 . . .

Posted by BeNotForgot at Thursday, April 03, 2008 No comments: