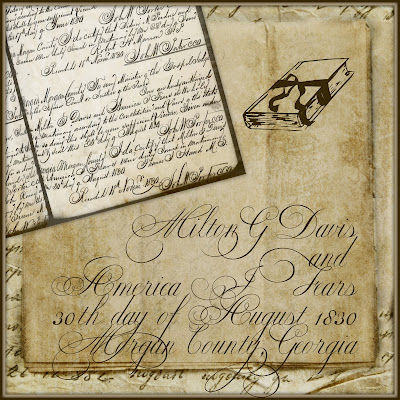 On this date in our family history . . . the 30th day of August . . . in the year 1830 . . . America J Fears becomes the bride of Milton Grant Davis . . . this America and Milton are 3rd great-grandparents of the Keeper of this family history blog . . . the record of their marriage shown in this collage was found in Georgia's Virtual Vault . . .


Research note . . . Many branches of this family have it in their records that *James* was her middle name, however, no contemporary record has been found showing what the *J* actually stands for.

Posted by BeNotForgot at Friday, August 30, 2013 No comments:


See also . . . The Devil in the Shape of a Horse by cousin Bill West . . . and Five People Hung for Witchcraft in Salem, Massachusetts by cousin Heather Wilkinson Rojo . . .

Austin, Texas. A letter received in this city Thursday from Post Oak Island says that on the night of August 1, a party of fifteen or twenty men attacked the Olive brothers on their ranch. Besides the three brothers there were three white men and two negroes. Jay Olive was shot in the body in twenty-two places, and it is thought he will die. Prince [sic] Olive was shot in the hip; and a man named Butler several times in the leg and hip. Bill Wells, one of the negroes, was shot twice in the head. The raiders got $750 from the house, and then forced one of the negroes to burn it. The trouble is said to have grown out of the Crow and Turner tragedy, which occurred in that neighborhood some six months since.

The Olives are engaged largely in the raising of stock, and have suffered severely for a long time at the hands of horse and cattle thieves. Several months ago they gave out that they would kill any one they found skinning their cattle or riding their horses, and not long after that old man Crow and a suspicious character named Turner were killed in the woods near McDade while skinning a beef with the Olive brand. Crow had a son who had served one or more terms in the penitentiary, and he accused the Olives of killing his father, and threatened to revenge his death. Since that time it is said he has been at the head of a band of roughs and desperadoes, and this crowd is suspected of committing the horrible tragedy perpetrated on the Olive brothers and their employees on the night of August 1. The Olive brothers are said to be upright men, and they have many warm friends in the vicinity of where they live, and that further trouble and bloodshed will follow is quite probable. What action the Governor and the authorities will take, we cannot say, but certainly the affair calls for hearty and rigid work. Life and property is not safe in Texas, and there is no use of any one asserting it is.

Posted by BeNotForgot at Saturday, August 10, 2013 No comments: