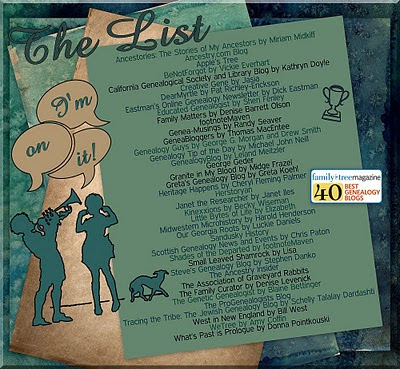 Congratulations to each and every blog nominated for the Family Tree Magazine list of 40 Best Genealogy Blogs. This blogger was extremely humbled and honored just to be nominated this past autumn (thank you, to you-know-who-you-are) . . . and never thought for a minute that benotforgot would be in the top 40! Thanks and {hugs} to each and every individual who took the time to vote, and helped benotforgot make its way into this illustrious company of geneabloggers.

As of just a few days ago, it has now been six (6) years since the word combination benotforgot popped into my head, and I immediately purchased the domain name, benotforgot.com . . . and it's almost two years since I made my very first post on this blog. Just about this time last year, in celebration of one year of blogging on this blog, I set up a 2nd blog . . . benotforgot-calendar.blogspot.com . . . where I post a daily listing of that day's events from the limbs and branches and leaves of my family tree (plus a few other trees in the surrounding forest). In January of this year, my 3rd blog went live . . . benotforgot-journal.blogspot.com . . . where I am making a daily entry from a 150-year-old civil-war-era journal that frequently mentions several of my ancestors. And the absolute highlight of all of this? 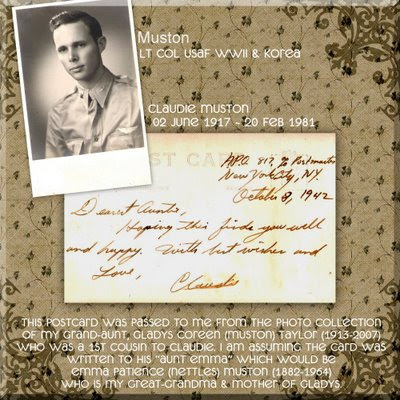 The Februaries of our Elizabeth

This is the Captured Moments column from the February 2010 issue of Shades the Magazine . . . please go visit footnoteMaven at Shades of the Departed to read her guidelines for viewing and enjoying the entire digital masterpiece . . . and by the way, our fM does l-o-v-e comments, so do let her know what you think of her delightful publication! V. 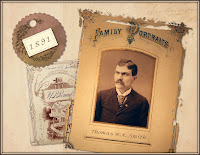 Thomas Warren Alonzo Smith, Sr. ends his own life at his home, 43 Prospect Street, in Biddeford Maine . . . this T.W.A. Smith is a great-grandpa of the Keeper of this family history blog . . .


Thomas Warren A. Smith, the landscape gardener and retired florist, during a short absence of his wife, asphyxiated himself with gas at his home, 43 Prospect street, Thursday afternoon, between 4 and 5 o'clock.


His lifeless body was found by his wife, sitting in a large easy chair, with gas escaping from a rubber tube, which was connected with the gas range in the kitchen and held close to his mouth. The end of the rubber tubing had been tied by Mr. Smith on his breast with the end about half an inch from his mouth. The end attached to the gas range had also been tied on, as Mr. Smith, who had made two other attempts to end his life, it is claimed, evidently wanted to make sure he would succeed this time.


Mrs. Smith left her husband in the home about 4 o'clock to come downtown and make purchases of food and articles for the family. When she returned she found all the doors leading to the house locked and her suspicions became aroused at once.


Hurrying to the home of ex-Councilman Daniel B. Finnell across the street, Mrs. Smith secured the loan of a shovel in order that she might remove some snow which prevented her getting a ladder which was under the barn. With the aid of the ladder Mrs. Smith was able to get into the house through a chamber room window on the second floor. When she went downstairs the odor of gas was very noticeable. Quickly opening her breath [sic], as the odor of gas was something terrible.


Quickly opening windows and shutting off the gas cock, Mrs. Smith went to her husband, who sat in a large easy chair in front of the range and one look satisfied her that he had been successful in taking his life.


Mrs. Finnell arrived at the house and she was followed by Carl Hall, also a neighbor, and Dr. J.F. Trull was called by telephone. The physician on his arrival found that Mr. Smith was beyond all aid. Medical Examiner Charles F. Trayneg was notified and after learning the facts of the case, concluded it was a case of suicide.

Mr. Smith had carefully planned taking his life, according to the way he arranged everything. He removed a shelf from the range and used papers to keep the rubber tubing from touching the stove. The end of the tubing was tied to the gas cock of the gas stove, while the other end was securely held with string on his breast so that the end would come close to his mouth and nose.


Incurable illness is given as the cause for the rash act. Mr. Smith suffered an attack of influenza 14 months ago and double pneumonia set in and his life was saved only by a hard battle, in which his kind and devoted wife took a prominent part. Heart trouble developed and his condition was such that it was plain to his many friends that he would not be able to do much more work. Only recently in talking with a friend he said he could walk but little and had to ride if he wanted to go any distance.


T.W.A. Smith was well known in the two cities and the news of his death was received with profound sorrow. He had made other unsuccessful attempts to end his life, by inhaling illuminating gas, while a revolver was taken from him only a few days ago.


Everybody has a good word for Mr. Smith. Friends knew that he was suffering physically and that everything was being done for him in the line of medical aid, but his condition could not be helped.


He was prominent in Masonic and Odd Fellows circles and was a member of the First Baptist church. Mr. Smith was born in Lewiston 15th September 1866, and was the son of the late Atwood and J. Morilla Baker Smith. He received a public school education, and was employed in the Pepperell mills before entering the florist business.


He was located on Prospect street, next to his home, for many years. As a landscape gardener he was in great demand, especially at the Pool, and his work was always highly spoken of. He was affiliated with many organizations, among them Laconia lodge, I.O.O.F.; York Encampment, J. H. Dearborn canton, Mavoshen lodge, K. of P.; Dunlap Lodge of Masons, Squando Tribe, Improved Order of Red Men, and Simon S. Andrews camp, Sons of Veterans.


Mr. Smith is survived by his widow, one son, Thomas W. A. Smith, Jr., and one daughter, Miss Elizabeth M. Smith. The funeral will take place Sunday afternoon with services at 2 o'clock at the late home, 43 Prospect street. Relatives and friends are invited without further notice. 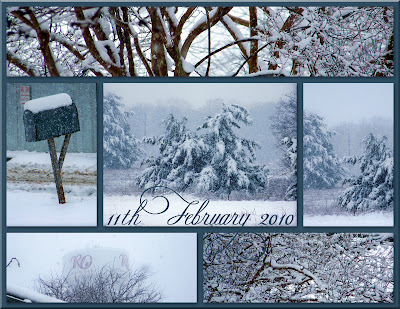 
One of the songs performed during the ceremony was Sunrise, Sunset, from the movie, Fiddler on the Roof . . . there were not many dry eyes in the church by the time the wedding singer finished this one . . . 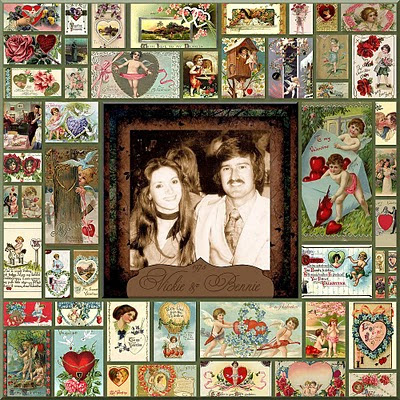 What words of wisdom can I give them?
How can I help to ease their way?
Now they must learn from one another
Day by day

They look so natural together
Just like two newlyweds should be
Is there a canopy in store for me?


The center photo in the collage was taken shortly after the wedding, when the newlyweds were attending a live performance of Fiddler on the Roof at the Country Dinner Playhouse in Austin, Travis County, Texas . . . the tickets were a gift from the law office where this newlywed was employed at the time . . .

P.S. There are many sources for free Valentine images. This collage was created from my files of free images that have been collected over the years, from a lot of different sources and collections. 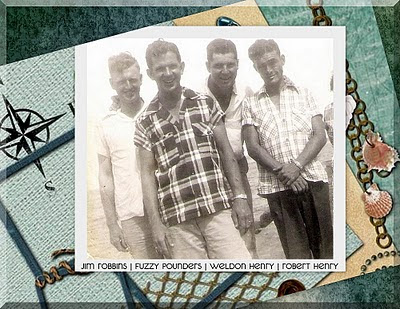 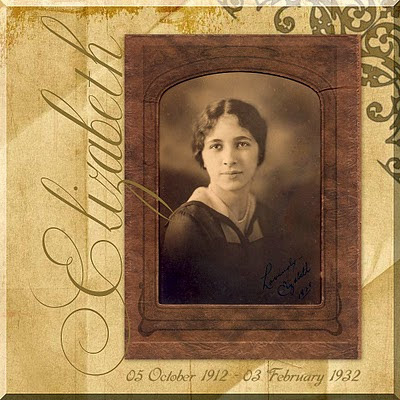 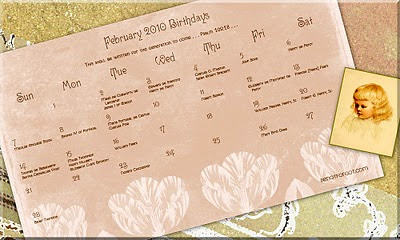 When it came time for Saturday Night Genealogy Fun with Randy on January 30th, I am happy to say that I was delightfully busy making memories with family members at a birthday event held south of Houston -- so I am LATE for SNGF! But since this one is right up my alley, I just could not resist putting something together.

Since we are already into February, I went ahead and did my calendar for this month. I created the basic calendar using Family Tree Maker 16.

Maybe I need to spend some more quality time with FTM 2010, but I do not yet see a way to personalize calendars as Family Tree Maker has always allowed us to do -- they seem to have taken away the customization features that I like to play with. 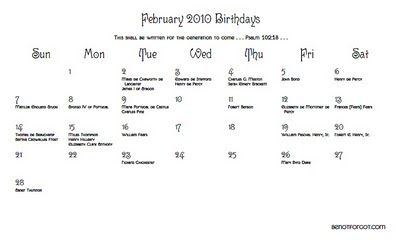 Once I had the calendar the way I wanted it in FTM16, it was exported as a PDF. The PDF was opened for viewing, and the image was captured using the PRT SCR button. The image was then cropped to the desired size using Picasa.

Using a free scrapbook page found on the internet, a multiple exposure collage was created using Picasa. This multiple exposure was then used as part of a picture pile collage, along with a free background image and a free clipart image.

I actually wound up doing two calendars -- one for birthdays, and one for anniversaries -- because I could not get all of the information on one calendar page. The one you see here is now the desktop on my laptop computer. The one I did for February anniversaries is scaled for the monitor for my desktop computer, and is displayed there.

Please do not hesitate to ask questions if I don't make sense!