God having called me to Confess my sin and Apostasy in that fall in giving the Devil advantage over me appearing to me like a Black, in the evening to set my hand to his Book, as I have owned to my shame. He told me that I should not want so doing. At Salem Village, there being a little off the Meeting-House, about an hundred five Blades, some with Rapiers by their side, which was called and might be more for ought I know by B and Bu[rroughs] and the Trumpet sounded, and Bread and Wine which they called the Sacrament, but I had none; being carried all over on a Stick, never being at any other Meeting. I being at Cart a Saturday last, all the day, of Hay and English Corn, the Devil brought my Shape to Salem, and did afflict M[artha] S[prague] and R[ose] F[oster] by clitching my hand; and a Sabbath day my Shape afflicted A[bigail] M[artin] and at night afflicted M[artha] S[prague] and A[bigail] M[artin] . E[lizabeth] J[ohnson ] and A[bigail] F[aulkner] have been my Enticers to this great abomination, as one have owned and charged her to her Sister with the same. And the and then all will be well. And now I hope God in some measure has made me something sensible of my sin and apostasy, begging pardon of God, and of the Honourable Magistrates and all Gods people, hoping and promising by the help of God, to set to my heart and hand to do what in me lyeth to destroy such wicked worship, humbly begging the prayers of all Gods People for me, I may walk humbly under this great affliction and that I may procure to my self, the sure mercies of David, and the blessing of Abraham.


The entire case file for William can be seen HERE . . . this William Barker is an 8th great-grandpa to the Keeper of this family history blog . . .

On this date in our family history . . . the 29th day of August . . . in the year 1670 . . . John Wheeler dies in Newbury, Massachusetts . . . this John Wheeler is an 11th great-grandpa to the Keeper of this family history blog . . . he is mentioned as one of the "First Settlers of Salisbury" on page ten of The Old Families of Salisbury and Amesbury where he is listed as John Wheler (#66) . . . and the text of his will as well as a brief bio can be found in History of the Wheeler Family in America, which has the following to say about him . . .

He is said to have been born at Salisbury, Wiltshire, England, and to have sailed for America on March 24, 1633-34 in the ship "Mary and John," bringing his wife Ann and six children and leaving four sons in England. He spent the first year of his residence at Aggawam (now Ipswich), Mass. The following year he removed to the settlement on the north bank of the Merrimac River that was called Salisbury after 1640, and as one of its original proprietors, in 1641 he received land there which he still held and paid tax on as late as 1653, notwithstanding he had removed to Newbury, Mass., before 1650. He died at Newbury, Aug. 29, 1670, aged 52, and his wife Ann died there Aug. 15, 1662.


On this date in our family history . . . An Inventory of the Goods & Chattles of Mr. Henry Hilleary taken & appraised by us the Subscribers in Current Money at Six Shillings P Spanish Dollar this 28th day of Aug. 1783 . . . this Henry Hilleary is a 6th great-grandpa to the Keeper of this family history blog . . .

In the Milk house

In the Room Joyning the Hall


In the Girls Room

In the Hall Closet


On this date in our family history . . . the 25th day of August . . . in the year 1649 . . . the marriage of Hester Blakely and John Bonde is recorded in the Massachusetts Town Vital Records Collection (compiled by the New England Historic Genealogical Society) . . . this John and Hester (Esther) are 10th great-grandparents of the Keeper of this family history blog . . . 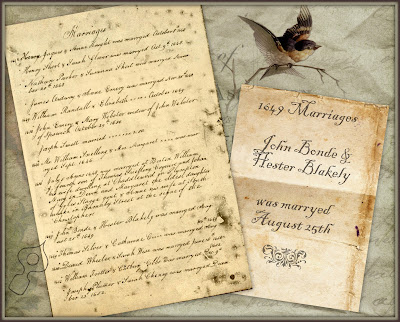 Posted by BeNotForgot at Monday, August 25, 2014 No comments: 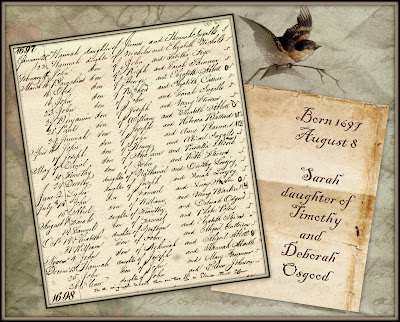 
On this date in our family history . . . the 6th day of August . . . in the year 1930 . . . Nancy Virilla Pounders nee Quinn dies in Franklin County, Alabama . . . this Nancy is a 2nd great-grandma to the Keeper of this family history blog . . . and she will be laid to rest in the Spruce Pine Cemetery . . . just a few months before her death, Nancy Virilla penned the following words (with "original" spelling, grammar, punctuation) to one of her granddaughters in Texas . . .

Spruce Pine, Alabama -- 28 April 1930. Mrs. Minnie Fretwell. Dear granddaughter and family how are you all by now fine I hope we are all as well as common hope those few lines will find you all the same well you ask me if Ruff and wife lived with me yes they live with me, well I sure did hate to here of Odell's death but that is something that we all half to do some day I thank sometimes it will be me next well I have 12 little chickes one hen setting will hatch in a few days, Minnie wish you would come to see me I would like to see a lot of my kindred once more in life I am getting pretty old not got long here on earth now, Ruff has got corn up he hasent planted any cotton yet it is so dry my garden looks very well for the weather to be so dry well I will close as I can't think of anything worth writing so ans real soon and all the news as ever your grandma N V POUNDERS

Posted by BeNotForgot at Wednesday, August 06, 2014 No comments: