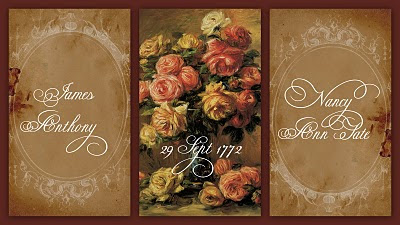 On this date in our family history . . . the 29th day of September . . . in the year 1772 . . . Nancy Ann Tate becomes the bride of James Anthony in Bedford County, Virginia . . . this bride and groom are 5th great-grandparents to the Keeper of this family history blog . . .

A grainy black and white PDF of the following document was shared in 2007 on ancestry.com by someone with the user-name of QuintonAnthony66 . . . 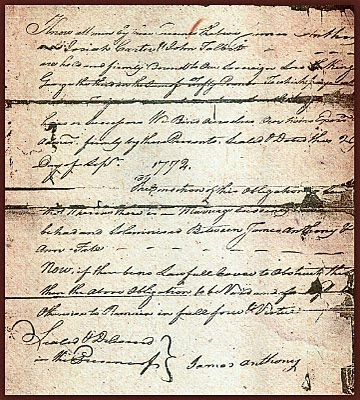 The unreadable portions in this document are replaced with a series of three dots / periods in the following transcription . . .


Know all men by these Presents that we James Anthony, Josiah Carter, and John Talbot are held and firmly bound to our Sovereign Lord King George the third in the sum of Fifty Pounds. . . . We bind ourselves . . . firmly by these Presents. Sealed & Dated this 29 Day of Sept. 1772.

The condition of this obligation is such that Whereas there is a Marriage . . . be had and solemnized between James Anthony & Ann Tate.

Now if there be no lawful cause to obstruct the same then the above obligation to be Void and found . . . otherwise to remain in full force & virtue.


Posted by BeNotForgot at Wednesday, September 29, 2010 No comments: 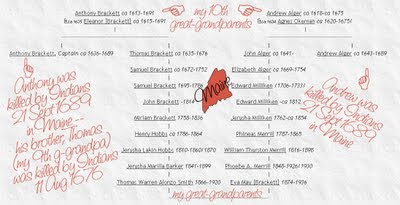 On this date in our extended family history . . . the 21st day of September . . . in the year 1689 . . . two great-grand-uncles of the Keeper of this family history blog were killed in Maine during the Indian Wars . . . Andrew Alger, Jr., a younger brother of my 9th great-grandpa John Alger, was killed in a battle at Falmouth while fighting under Benjamin Church . . . and Captain Anthony Brackett, a younger brother of my 9th great-grandpa, Thomas Brackett, was killed on his farm at Back Cove, on the site of the well known mansion of the James Deering* family, a short distance from Deering's Bridge in Portland . . . 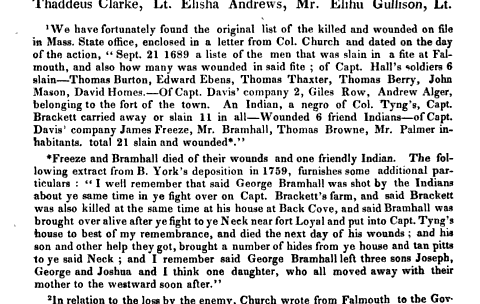 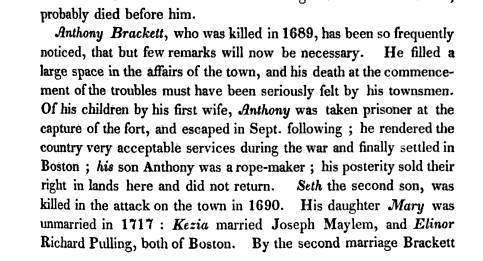 *Deering Oaks large public area in Portland, Maine, which has a baseball diamond, tennis courts, a playground, and a pond. The area was the site of a September 1689 battle between the British, French, and Native Americans. The City of Portland largely acquired the land from the Deering, Preble, and Fessenden families in 1879 as part of the rebuilding following the devastating 1866 fire. The pond in Deering Oaks at one time, filled and drained with the ocean tides. It was naturally connected to Back Cove until altered to suit roadways in the late 19th century. Deering Oaks also hosts the city's monument to the Spanish-American War. During the winter, one can ice skate on the frozen pond, and until the late 1990's, paddle boats could be rented during the summer season to explore the confines of the pond and enjoy the scenery. 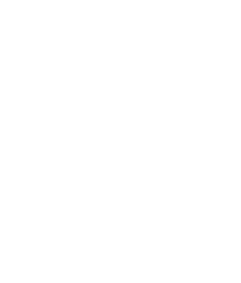 On (or about) this date in our family history . . . the 8th (or 18th?) day of September . . . in the year 1784 . . . Jonathan Barker is born in Medford, Massachusetts . . . this Jonathan is a 4th great-grandpa to the Keeper of this family history blog . . . from Google Books comes this excerpt from Genealogical and family history of the state of Maine, Volume 4 by Henry Sweetser Burrage, Albert Roscoe Stubbs . . .

Wordless Wednesday :: Where I Blog 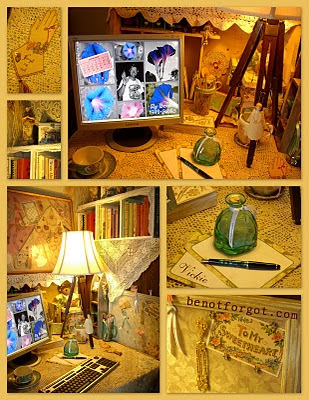 Where do YOU blog?

Click anywhere on the collage
to enlarge the image.