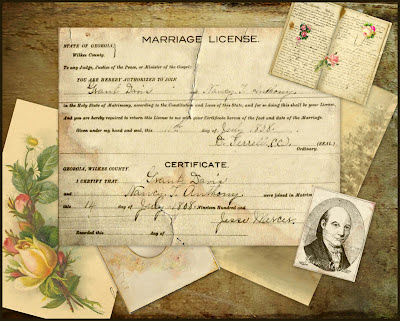 the ceremony is performed in Wilkes County, Georgia by the Rev. Jesse Mercer (pictured to the right) . . . this Nancy and Grant are 4th great-grandparents to the Keeper of this family history blog . . .

Representative Men and Old Families of Southeastern Massachusetts:
Containing Historical Sketches of Prominent and Representative Citizens
and Genealogical Records of Many of the Old Families (Google eBook)
J.H. Beers & Company, 1912

Our Mollie is six years of age in 1859 when a 4th of July celebration is held in her hometown in Oktibbeha County, Mississippi . . . both of her parents are still alive at this time . . . as well as both of her grandfathers . . . Grandpa West is enumerated in Starkville on the 1860 census . . . while Grandpa Carter is in Pontotoc County, Mississippi . . . Aunt Matilda (West) and Uncle Britton Valentine are in Oktibbeha County . . . as well as Aunt Mary (Carter) and Uncle Bill Valentine (Britton and Bill are brothers) . . . a decade down the road, Mollie is a 16-year-old orphan on a wagon train headed for Texas . . . she would later pass on many of her memories of the years of the war between the states . . . wonder if any of these family members participated in the large assemblage described in the following newspaper clipping from 1859 . . . or if they had an inkling of just how much the world they lived in was about to change . . .


It was our good fortune to be present at the Celebration at Starkville yesterday. There was a large assemblage of the citizens of Oktibbeha, and neighboring counties there and although the most of them were strangers to us, it required but half an eye to see that every countenance was lighted up with enthusiasm -- and every eye sparkled with the fire of patriotism which warms the American heart at the return of our Independence Jubilee. A band of skillful performers enliven the spirits of the vast concourse of chivalry and beauty with lively, stirring strains of music -- and the old Star Spangled Banner, so dear to the eye and the soul of the freeman, spread out its proud folds on the morning breeze.


At 11 A. M. the Exercises began with reading of the Declaration of Independence by Mr. Wm. Lockhart. Mr. L. first paid a beautiful tribute to the band in attendance after which he read the Declaration in a clear distinct voice audible to the whole crowd, and took his seat amid rounds of applause. After a thrilling performance by the band the young orator of the Day -- H. L. Muldrow Esq., was introduced and entertained us for perhaps an hour with an elaborate discussion of the topics so naturally presented to one occupying his responsible position. We know not which to most admire in the oration -- the Feast of Reason -- the flow of soul -- the seasoning of happy expression or the bouquet of elevated thought and beautiful language so appropriately addressed to the Ladies, which came in as a welcome dessert and was highly appreciated, and loudly applauded as the speaker resumed his seat.


Some gentleman then read to the audience the patriotic Appeal to Mississippians in behalf of the Mount Vernon Association from the gifted pen of Mrs. Col. I. N. Davis. There is a noble sentiment of lofty public spirit in every line of that truly beautiful poem which does honor to Mrs. D. as a friend of patriotism, as a devoter of chaste poetic literature, and in the sublime capacity of an American woman.


A procession was then formed and we all marched to the table in a neighboring grove, where a sumptuous dinner was prepared for all. The Agricultural Society was addressed at the Court House, by Col. I. N. Davis in the evening, and the whole crowd stayed to hear him. His remarks were to Southern farmers -- they were forcible and to the point -- made up of happy conceptions and appropriate delivery. His reasoning was so clear and logical that any mind comprehending 2 and 2 make 4, must aknowledge [sic] the justness of his conclusions. The people of the South must see the truth of Col. D.'s position on questions of vital importance to her interests now, or regret in later years that they were so short-sighted.