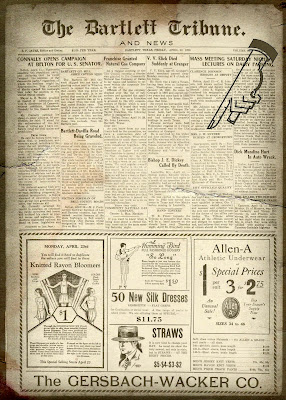 Georgetown, April 18. -- Funeral services were held here Tuesday for Mrs. Catherine Jane Coffee Snyder, 84, pioneer resident of this city, who died at the home of her daughter, Mrs. Chas. A. Wilcox, in Austin. She is survived by three sons, C.T. Snyder of Douglas, Wyo.; T.A. Snyder of Harrison, Neb.; D.F. Snyder of Port Arthur; three daughters, Mrs. C.A. Wilcox of Austin; Mrs. D.T. Simons of Fort Worth and Mrs. Dalley Whitcomb of Corsicana. The Bartlett Tribune and News, April 20, 1928


The above mentioned Catherine . . . aka Kate . . . became the bride of John Wesley Snyder on the 7th day of April 1867 . . . Capt. Snyder, with his brothers, Dudley and Tom Snyder, was in the live stock business in Texas many years, accumulating a large fortune . . . the former site of the J.W. Snyder home is now occupied by Southwestern University's fine-arts building in Georgetown, Williamson County, Texas.


This Kate is the daughter of Col. John T. Coffee and his 2nd wife, Catherine Grace Hunt (1827-1844) . . . following the deaths of his first three wives, Col. Coffee married my widowed 1st cousin (four times removed), Eunice Margaret Amelia Vontress nee Allen . . . she had one surviving child (out of three) from her first marriage . . . and he had a total of seven children from his previous marriages . . . and then John and Eunice had (at least) five more children together.

Posted by BeNotForgot at Tuesday, April 16, 2013 No comments: