On this date in our family history . . . the 20th day of July in the year 1655 . . . Robert Brooke dies in Calvert County, Maryland . . . this Robert Brooke is a 10th great-grandpa to the Keeper of this family history blog . . . he is credited with bringing fox hunting to America, and left a written memorandum of his family, and of the time of his settlement in Maryland, i.e. . . .


"The before-named Robert Brooke, Esquire, arrived out of England in Maryland the 29th day of June, 1650, in the 48th year of his age, with his wife and ten children. He was the first that did seat the Patuxent, about twenty miles up the river at Delabrook, . . . In 1652 he removed to Brooke Place, being right against Delabrook ; . . ."


He departed this world the 20th day of July, and lieth buried at Brooke Place Manor ; . . . 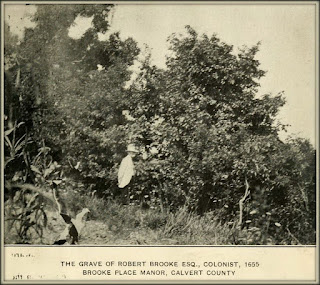 Image from
Old manors in the colony of Maryland
by Sioussat, Annie Leakin

Catherine “Kitty” Waring lived in southern Prince George’s County and married her cousin Edward Gantt Waring before their move to Texas in 1840. In the 1850 slave census, three African-Americans, including two women, lived at the Waring farm [in Liberty County, Texas]. Perhaps they were there to help with the quilt a few years earlier. Edward died in [sic, i.e., before] 1850, and by 1860, Kitty had returned to Maryland.


Back in Maryland, Kitty would apparently live out her days in the Southampton home of her son, Dr. James Waring . . .

This Kitty is a 4th great-grandma to the Keeper of this family history blog . . .

Posted by BeNotForgot at Thursday, July 12, 2018 No comments: 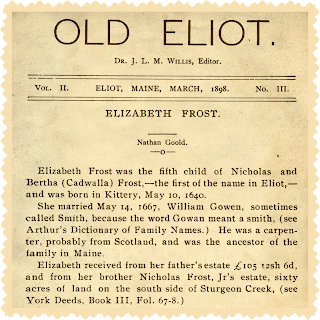 Old Eliot :
a monthly magazine of the history and biography
of the Upper Parish of Kittery, now Eliot
Posted by BeNotForgot at Thursday, May 10, 2018 1 comment: 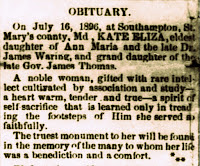 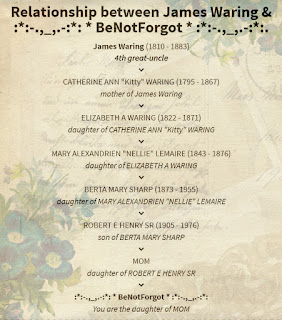 Posted by BeNotForgot at Saturday, April 07, 2018 No comments: 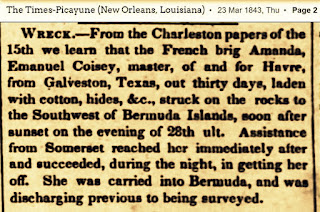 One of the passengers on "the French brig Amanda" was Alexander Lemaire, who is a 3rd great-grandpa to the Keeper of this family history blog . . . the Amanda was never heard from again after leaving Bermuda . . .

P.S. Please do contact me if you happen across a passenger list for this ship. benotforgot at gmail dot com

Posted by BeNotForgot at Friday, March 23, 2018 No comments:

Missing Vessel. -- Letters have recently been received, stating that the French brig Amanda, which put into Bermuda in distress, last February, on a voyage from Texas to Havre, and sailed thence the same month, for her destined port, has not since been heard of. The Times-Picayune, New Orleans, Louisiana, February 25, 1844.

One of the passengers on the brig Amanda (which sailed from Galveston, and was never heard from again) was Alexander Lemaire, who is a 3rd great-grandpa to the Keeper of this family history blog.

P.S. Please do contact me if you happen across a passenger list for this ship. benotforgot at gmail dot com

Posted by BeNotForgot at Sunday, February 25, 2018 No comments:

On this date in our extended family history . . . in The Times-Democrat (New Orleans, Louisiana), February 8, 1887 . . . "The death is announced in Lexington, Ky., of Major G. Henry Buford, who was a wealthy and prominent farmer. Major Buford was a brother of Gen. Abe Buford, and also of Col. Tom Buford, who killed Judge Elliott, of the Kentucky Court of Appeals. A singular fatality seems to have attached to this family. Many years ago [1851], before the war, Sinkley [Sinclair] Buford, another, brother, was shot and killed in the courthouse at Versailles, Ky., by George Carter. Gen. Abe Buford, depressed by the loss of his fortune, committed suicide in Indiana, and Tom Buford, smarting under the conviction that he had been unjustly deprived of his legal rights by the courts, slew Judge Elliott in the streets of Frankfort. The death of Major Henry Buford removes the last of the brothers. The family was one of the earliest to locate in Kentucky, and from father to son have always been among the foremost supporters and patrons of the turf, having bred some of the finest thoroughbreds ever turned out in America."

This "last of the Bufords" and his brothers were 3rd cousins four times removed to the Keeper of this family history blog.

Posted by BeNotForgot at Thursday, February 08, 2018 No comments:

1932 :: When Ghosts Walk in Courthouse Shade

One of the articles in that 1932 Frontier Times was entitled "When Ghosts Walk in Courthouse Shade" . . .

the "Ghosts" story was written by Vivian Richardson and was originally published in the Dallas Morning News in August of 1931 . . . one of the "ghosts" of San Augustine mentioned in that article is Elisha Roberts, who is a 3rd great-grandpa to my Mom . . . Vivian Richardson quoted an old Texan as saying that "I always think of the San Augustine country as the Valley of the Giants." Vivian went on to say that . . .


I think the deeds of the Giants will live on in the shadow of San Augustine's court house as long as there is a patriarch left to recount them. . . . it is on that ground one may almost always, of a likely afternoon, find the old men talking, and there I found them, that hot, singing July day, and listened reverently. . . . Sam Houston . . . and old Elisha Roberts, the last alcalde under the Mexican regime, could sit all day talking and whitling. I used to think they talked about Tennessee, where they knew each other, but I don't know. Maybe they didn't. . . . Almost every Texan who amounted to anything in the early days at one time either lived or stayed for long periods in San Augustine. . . .

P.S. . . . it is now after 3 a.m. on the 31st . . . and as I put the finishing touches on this blog post, I sit here waiting for the "super blue moon eclipse" of which it has been written that "this rare celestial event - a blue moon, a supermoon, and a total lunar eclipse - hasn't happened in over 150 years." . . . I will call Mom in a few hours so she can see the eclipse from central Texas . . . seems that even the heavenlies are collaborating to celebrate her 86th birthday! 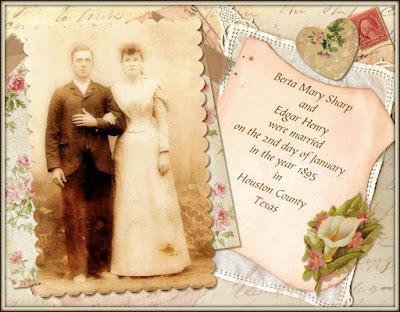 This Edgar and Berta are maternal great-grandparents to the Keeper of this family history blog . . .

FYI . . . . . . original photo of Edgar and Berta from our family photo collection . . . blank journal page containing the details of their marriage is from a friendship album belonging to Berta Mary . . . linen hanky is from the private collection of benotforgot . . . postage stamp is from the birth announcement for Robert Henry, Jr. mailed to Edgar and Berta by Elizabeth Marilla Henry nee Smith  . . . heritage collage created at mycanvas.com . . . some free graphics from Far Far Hill . . .

Posted by BeNotForgot at Tuesday, January 02, 2018 No comments: