On this date in our extended family history . . . the 9th day of November . . . in the year 1872 . . . our distant cousin, Oliver Rice Chase, had a business building destroyed by the flames of the Great Boston Fire . . . unfortunately, it was just one year earlier (in October of 1871) when Oliver's brother, Daniel, lost his business due to the Great Chicago Fire . . . my common ancestors with this particular branch of the Chase family are Aquila Chase and his wife, Anne Wheeler . . .

Sometime after the 1872 fire, another distant cousin, Abner W. Harmon, penned the words to a poem memorializing that conflagration . . . our common ancestors with Abner are John Harmon and his wife, Sarah Roberts . . .

The Great Fire in Boston.
Composed by A. W. Harmon.


On the ninth of November,
in eighteen seventy-two,
All nature and old Boston
looked gay with splendid hue;
The sky was clear and beautiful,
the stars were sparkling bright,
And Boston looked most lovely,
for it was Saturday night.

The evening meal was finished,
from care and labor riven,
When suddenly and loudly,
the alarm of fire was given,
And in a single moment
the fire bells rang aloud,
The cry of fire was echoed,
and faster flew the crown.

The Firemen came out quickly,
brave hearted men and true,
but little were they thinking,
of the great work to do;
Fast flew the fire,
consuming wealth, honor, fame and pride,
And the bravest of the Firemen,
it instantly defied.

And by the City authorities
every effort was made,
To stop the progress of the fire;
while hundreds lent their aid,
The Firemen worked like heroes,
as on the flames they played;
Engines from various places,
with speed come to their aid.

On Summer Street and Kingston,
on Otis, Milk and High,
On Federal, Pearl and Congress,
swift did the Fire-Fiend fly,
On Deveonshire and Washington,
State, Franklin Street and Arch,
Destroying all before it,
as eastward it did march.

And what was but yesterday
a beautiful prosperous place,
Is now a scene of desolation,
its beauties all erased,
Saving only a wilderness
in this part of the town,
Of chimney stacks and broken walls,
that had not tumbled down.

The merchant and the pauper,
alike they looked aghast,
Through iron, steel and marble,
the great destroyer pas'd,
Thousands of costly buildings,
in vengeance down it felled,
And O, what sad destruction,
the Sabbath morn beheld.

Merchants their goods were packing,
ere their store walls fell down,
And loaded teams were hurrying
in all directions round;
The smoke so high ascended,
the villagers did say,
'Twas seen to rise from Boston,
a hundred miles away.

One fourth of that fine City
in ashes now is laid,
And a great change in business
it certainly had made;
The merchant and mechanic,
the toilor son and sire,
All, all are now lamenting with grief,
that terrible fire.

Hundreds of once rich merchants,
are by the fire made poor,
Thousands of people feel it,
the toiler's heart is sore;
But enterprise smiles bravely,
the merchants are awake,
They rise for their own benefit,
and for humanity's sake.

When the city of Chicago
had felt the Fire-Fiend's power,
Had seen its flames ascending,
in a dark and dismal hour,
Boston arose with sympathy,
the helping hand to lend,
Provision, money and clothing,
for her relief did send.

But little was Boston thinking,
so soon it would require,
Sympathy and assistance,
for its great loss by fire;
Towns, villages and cities,
has felt its power and wrath,
And thousands of our merchants
have laid low in its path.

Behold the noble Firemen,
so gallant and so brave,
See how they toil and labor,
buildings and wealth to save;
They risk their lives for others,
do all the good they can,
Toil for their neighbor's comfort,
for woman, child and man. 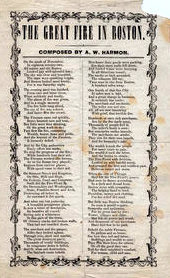 Clicking on the thumbnail to the left will allow you to view a vintage image of the 1872 poem by A.W. Harmon . . . courtesy of the Brown University Library . . . and, FYI, as mentioned in the very first paragraph of this blogpost . . . Oliver R. Chase did lose his place of doing business in this fire . . . but all youth, and those who are young at heart, can be grateful that the fire losses experienced by the Chase brothers did not put a halt to their enterprising natures . . . 'cause 'twas their 19th century endeavors that provided the very beginnings of the New England Confectionery Company . . . which still gives us Necco Wafers . . . as well as the Sweetheart candies that have become a fixture for Valentine's Day . . .