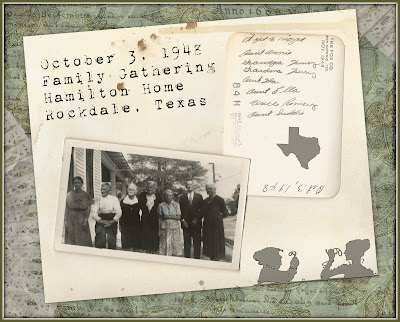 Sixty-five years ago today . . . on the 3rd day of October . . . in the year 1948 . . . a family gathering is being held at the Hamilton home on Cameron Avenue in Rockdale, Milam County, Texas . . . the photo in the collage was taken that day . . . the handwritten list on the back of a copy of that photo gives the family names . . . the people in said photo include the surviving children and daughters-in-law of William Paschal Henry and his wife, Josephine Wingfield Henry nee Davis . . .


Rockdale Reporter, October 7, 1948 -- A family reunion of the Henry's was enjoyed by many in the home of Mrs. J.D. Hamilton Sunday. Dinner, which was furnished by all, was served buffet style.