SIR,- After an absence of several months from this province to the United States, where I was detained much longer than I had anticipated in consequence of continued and serious indisposition, I returned to this place about the 1st of April last, and much to my astonishment and mortification found everything in disorder and confusion in this section of the province. . . . We have just heard that he [James Gaines] has decreed the expulsion of Judge Williams and Mr. Elisha Roberts [*], two of the most wealthy, intelligent, industrious, and useful citizens in the whole province. . . .

Posted by BeNotForgot at Thursday, July 21, 2011 No comments: 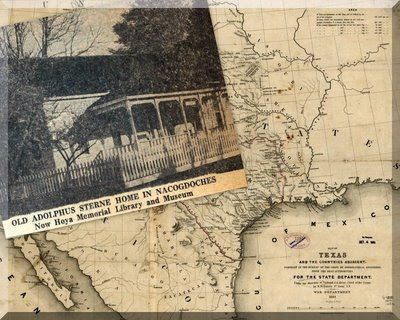 From September 28, 1840, to November 18, 1851, Nicholas Adolphus Sterne kept a diary of his daily activities, which is a valuable source of information on the period of the Republic of Texas (1836-1846). The names of some of our kith 'n kin are scattered through the pages of his diary . . .


Wednesday the 13th Send off Eastern Mail, Mr A. McDonald his Lady, and Mr Miss Edwards, a niece and nephew of Mrs Elisha Roberts arrived, spend the day very agreably,-- made a Sale to Moses L. Patton of the Land I purchased from Jose Ygnacio Ybarbo's Heirs, got my note for $71.00 I gave Doctor Starr, also a receipt I gave Patton for $90.00— spoke to Ned Taliafero respecting some Land, he wants to purchase of me on the Loco, but it is no go, as he wants it on a credit--
Thursday the 14th July 1842 fine weather, done some business at the Office, gave Mr McDonald a Ball in the Evening was well attended, and every body enjoyed themselves--

My still unanswered* question is . . .
"Who is this niece and nephew with the last name of Edwards?"

We have not been able to find them on either the ROBERTS side or the GILL side of the family. This question has already been posed (in 2006) to a study group composed of descendants of George Roberts and Rhoda Payne . . . who are Elisha's parents . . . and my 5th great-grandparents . . . with no results so far . . .