Closer came the fighting until one day we could hear the cannon booming as a battle was fought over a bridge maybe twelve miles from our home. I remember what they called that bridge, though I don't know how you would spell it ... Sookietoncha, it sounded like [i.e., Sakatonchee].

It made cold chills run over you to hear that cannon. We had already had several wounded soldiers to take care of . . . Aunt Mary [Mary Valentine nee Carter (1814-1892)] and Mother [Sally West Thomas nee Carter (c. 1820-1868)] were fine nurses ... but now they really poured into the house.


I remember that Col. [Jeffrey] FORREST had come by the day before and asked Aunt Mary for a horse to ride. She had told him to take his pick, only leave her old Tom to ride, since he was real gentle. But he insisted on using Tom, and in anger she told him, "I hope he does you no good, Sir!"


Late the next day, after the battle at the bridge, old Tom came home riderless with blood all over the saddle. Col. FORREST had been killed on him. Aunt Mary wept in remorse and never again rode old Tom. Col. [Jeffrey] FORREST and Gen. [Nathan Bedford] FORREST were brothers, and we saw them often.


Assuming the above family story is true . . . then Old Tom is mayhaps depicted in the painting, Vengeance at Okolona, by John Paul Strain . . . these recollections of the years of the war between the states were told to Ruby Vance nee Nettles (1910-2003) by her paternal grandmother, Mollie . . . this same Mollie is a 2nd great-grandma to the keeper of this family history blog . . .

Posted by BeNotForgot at Sunday, February 22, 2009 No comments: 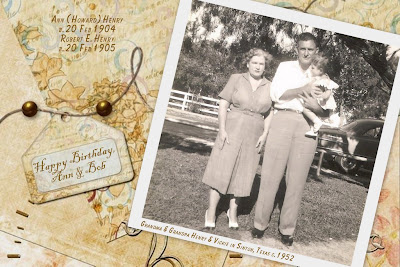 Posted by BeNotForgot at Friday, February 20, 2009 No comments:


The Evolution of a State Or, Recollections of Old Texas Days
By Noah Smithwick, Nanna Smithwick Donaldson:

". . . The first legislature met on the 16th of February, 1846, and three days later the curtain fell on the last, and in many respects, the most touching scene in the brief drama of the republic, when Anson Jones, its last president, standing on the steps of the old capitol, lowered the old flag from the mast and reverently furling it, announced amidst breathless silence,

"The republic of Texas is no more."

Many a head was bowed, many a broad chest heaved, and many a manly cheek was wet with tears when that broad field of blue in the center of which, like a signal light, glowed the lone star, emblem of the sovereignty of Texas, was furled and laid away among the relics of the dead republic.

But we were most of us natives of the United States, and when the stars and stripes, the flag of our fathers, was run up and catching the breeze unrolled its heaven born colors to the light, cheer after cheer rent the air.

Methinks the star in the lower left hand corner should have been especially dedicated to Texas. . . ."

Assorted ancestors of ours who are known to have been in Texas during this time period include . . .

Tom Buford was known all over Kentucky. He belonged to the proudest of the proud aristocracy of the blue-grass region, and he inherited a fortune. The Bufords were a historic family, scarcely less famous than the Breckinridges, the Clays, or the Marshalls. He was a typical Kentuckian in his powerful physique, his handsome face, his intellect, and the prodigality of his life. Few men were better read than he; his manners were the perfection of grace and courtesy, and he was a brilliant conversationalist. He was an old bachelor, devoted to the ladies and to wine. He played cards and bet on horse-races with the boldness and dash so characteristic of Kentuckians, and whether at poker or on horses he won and lost with a touch-and-go freedom. [This is an excerpt from the New York Times article of 09 June 1884 (see link below).]


By the time the following incidents occurred, our grandpa William had been living in Texas 20+ years, and was married with children . . . I do wonder if he ever knew of these tragic family happenings . . .


[Update as of February 2018 . . . the New York Times articles linked below are now behind a paid wall . . . I am currently able to find them via ProQuest as well as Newspapers dot com.]

As mentioned above, on July 20, 1879, on page 1, the N.Y. Times wrote about the "chivalrous murderer," Col. Buford, who stood trial for his life after killing Judge Elliott. The Judge had before him an appeal involving the loss of the family farm which had been operated by Buford's sister, who died after protracted litigation. The N.Y. Times wrote that "the trial which has been thus ended will take a prominent place in the history of criminal jurisprudence in Kentucky, not simply on account of the social positions of the prisoner and his victim, and the more than dramatic circumstances attending the killing of Judge Elliott, but also because, in the progress of the trial, the insanity plea on behalf of the murderer has been carried to what may be deemed its extreme limit."