Brackett Genealogy Descendants
of Anthony Brackett of Portsmouth
and Captain Richard Brackett of Braintree.
With Biographies of the Immigrant Fathers,
Their Sons, and Others of Their Posterity
By Herbert Ierson Brackett:

On this date in our family history . . . the 22nd day of June . . . in the year 1675 . . . Richard Kimball dies in Ipswich, Essex County, Massachusetts . . . this Richard is a 10th great-grandpa to the Keeper of this family history blog . . . his death is recorded in the Vital Records of Ipswich, Massachusetts . . . and is mentioned as follows in the History of the Kimball Family . . .

. . . Having thus made his will (1674) he waited for the coming of the messenger who would sunder all earthly ties and take him on his eternal journey. The angel delayed not long his coming. On the twenty-second of the following June the earthly pilgrimage of Richard Kimball ended, and, aged more than eighty years, he joined the great majority. . . . 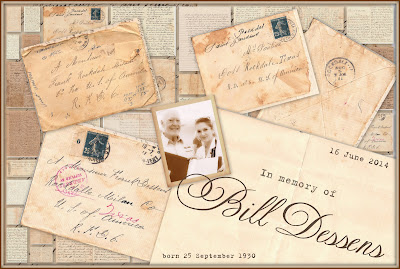 Photo of Bill and Vickie by Lucile Estell

Back in March of 2011 I purchased a packet of old letters in an online auction . . . my interest was piqued because the description said they were sent to Rockdale . . . which made them desirable (to me) as vintage items which could be scanned for use in digital scrapbook projects . . . the oldest letter is dated 1874 . . . which just happens to be the year of the birth of Rockdale . . .

No names were mentioned in the auction, so I did not know until the letters arrived in my mailbox what a treasure they were for one of Rockdale's early families (the Dessens) . . . I established contact with Bill Dessens, and we exchanged multiple emails regarding the letters . . . I sent scanned images of all of the letters to him . . . and was finally able to hand-deliver the originals to Bill on the 10th day of June in 2012 . . .


On this date in our family history . . . the 15th day of June . . . in the year 1762 . . . it is said that Jerusha Milliken is born in Cumberland County, Maine . . . her parents are Edward Milliken and Elizabeth Harmon . . . Jerusha grows up and marries Rufus Levi Merrill in 1781 . . . and they become the parents of multiple children, including Phineas Merrill . . . Jerusha is a 5th great-grandma to the Keeper of this family history blog . . .