Historical Register and Dictionaryof the United States Army
From Its Organization, September 29, 1789, to March 2, 1903
By Francis Bernard Heitman

On this date in our extended family history . . . late in the day on the 10th of May in the year 1902 . . . John Connell, Jr. bleeds to death from a knife wound following an unfortunate domestic disagreement with his son and namesake, John Connell III . . . the decedent is a 1st cousin four times removed to the Keeper of this family history blog . . . the Connell killing and subsequent legal proceedings are mentioned in numerous issues of the Dallas Morning News . . . the following biography is from A Memorial and Biographical History of McLennan, Falls, Bell, and Coryell Counties (Chicago: Lewis, 1893; rpt., St. Louis: Ingmire, 1984) . . .

J. H. Connell, a capitalist of Belton, was born in San Augustine county, Texas, when Texas was a province of Mexico, April 3, 1833, son of John H. and Matilda T. (Roberts) Connell, natives of Pennsylvania and Kentucky respectively.


John H. Connell's father, a native of Ireland, came to America at an early day and settled in Pennsylvania, where he followed his trade, that of blacksmithing. John H., leaving home when a youth, came in 1826 to Texas and engaged in the mercantile business near Austin, where he was married in 1830. Mr. Connell came to Texas with Sterling C. Robertson, and both secured large tracts of land.


The Roberts family were also among the pioneers of this section of the country. Elisha Roberts [4th great-grandpa of the Keeper of this blog] went from Kentucky to Louisiana in 1819, and in 1820 came to San Augustine, Texas. Elisha Roberts was one of the earliest settlers within the confines of the State.

Mr. Connell died at Viesca in 1834. He was truly a self-made man, and during his lifetime acquired considerable property. Belton is located on a portion of the land on which Mr. Connell once lived. Mrs. Connell having donated to the county of Bell 120 acres, in 1850, on which to establish the county seat. John H. Connell and his wife were the parents of two children: Josephine, wife of Anderson Hamblin, both being now deceased; and J. H., the subject of our sketch.


After the death of Mr. Connell, Mrs. Connell was married in 1835, to Samuel T. Allen, of New York, and their union was blessed in the birth of two children: Thomas R., deceased; and Eunice A., widow of Colonel John T. Coffee, of Missouri. Samuel T. Allen was killed by the Indians at the three forks of the Trinity, in November, 1838, and in the fall of 1847 Mrs. Allen married his brother, Thomas J. Allen. Her death occurred April 3, 1879, at the home of her daughter, Mrs. Coffee, in Georgetown, Williamson county, this state.

The subject of our sketch was reared amid the frontier scenes of what is now San Augustine, Milam, Williamson and Galveston counties. In 1854 he went to California, making the trip from Galveston by water; spent two years in the southern part of the Golden State, and while working in the mines lost his health. He was, however, financially successful. Returning home in the latter part of 1855, he engaged in farming and stock-raising in Texas up to the year 1861. The war coming on in that year, he joined the Confederate forces; was in the Trans-Mississippi Department, and participated in numerous skirmishes and battles.


Returning to his home in the latter part of May, 1865, Mr. Connell set about repairing his wasted fortune, and with renewed energy engaged in his old occupation of farming and stock-raising. He continued his operations in Williamson county till January 28, 1884, when he rented his farm and moved to his property in Belton. He owns considerable valuable real estate, his Belton home place consisting of some 250 acres adjoining town. He has a handsome residence, an intelligent family, and is comfortably situated to enjoy life, having practically retired from active business.

Mr. Connell was married September 15, 1869, to Miss Jennie Howlett, a native of Texas, born in Milam county, October 5, 1844, daughter of James and Sarah (Moore) Howlett, natives of Kentucky and Tennessee respectively. Both the Howletts and the Moores were among the early pioneers of Texas.

Mr. and Mrs. Connell are the parents of five children: John H., Jr., T.E., Susan, May T. and Albert L. T.E. is now a student at the State University of Texas. Mr. Connell and his wife are consistent members of the Methodist Episcopal Church South, and are held in high esteem by all who know them.

Sentimental Sunday :: Mommy and Me 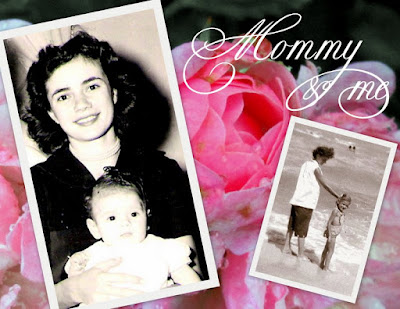 Sixty years ago today . . . on Mother's Day in the year 1951 . . . the beautiful young woman in this bricolage was about three months pregnant with the little one shown in the photos . . . the rose in the background is a 1932 antique rose called the Fairy Rose . . . the year of origin of that rose is the same year this young Mother was born in Essex County, Massachusetts . . . she was living in Texas (the home state of her Father, and his Mother and maternal Grandpa before him) by the time she started school, and has been here since . . . the Keeper of this family history blog is the little one in the photos . . . she is the first of four lucky children who are privileged to call this lovely woman Mom . . . Happy Mother's Day, Mom . . . luv you bunches . . . and thank you . . . for everything! . . .


Monday, May 1 at 1:10 p.m. marked the passing of one of earth's dearest and sweetest little mothers, Mrs. M.A. Nettles. She was born near Starkville, Mississippi, October 24, 1852, daughter of Richard and Sarah Mildred (Carter) West, and christened Mary Annie, but known practically all her life as Mollie. She was nine years old when the Civil War began and many were the interesting tales she told concerning it. In 1869 her family, together with several other families, came to Texas in wagons drawn by oxen and settled in and near Lexington.

The following year she married Joseph H. Nettles who had a woodworking shop in connection with the Hester Blacksmith Shop. They soon moved to Williamson County, but a few years later moved back to Lee County and bought a home in the Cole Springs community, near Tanglewood, where a son, Will, still lives. On May 1, 1890, her husband passed to his reward, preceding her by forty-nine years to the day. Of the ten children born to this union, six survive her, two boys and two girls dying in infancy. The surviving children are --


She had lived on the home place with her eldest son, Will, until February of this year, when she went to Lott to make her home with her youngest child, Joe, and family. It was here, following an illness of bronchial pneumonia, that she passed to her reward. The last six or eight months of her life was spent mainly in bed, but she was given loving and careful attention and was a sweet and patient sufferer. From the wisdom of her years she gave counsel, advice and help to all who sought it, and truly will she be greatly missed by all who knew and loved her.

All of her children, all but five of her twenty-seven grandchildren, and many of her forty-four great-grandchildren were present for the last rites, besides a great host of other relatives and friends. Services were conducted at the Baptist Church in Tanglewood Tuesday afternoon, May 2, 1939, by the Rev. O.J. Morgan, a former pastor of hers. She was a member of the Baptist church, joining in her early girlhood. Interment was in the family plat at the Tanglewood cemetery with Phillips & Luckey of Rockdale in charge. Those coming from Lott for the funeral were --

The last named was her constant attendant after moving to Lott, and truly a grand-daughter could have been no sweeter to her own grandmother than Annie Lou was to Grandma, who lovingly called her my girl. Present also was Mrs. Richard Mundine Sr. of Taylor, an old friend of the family.