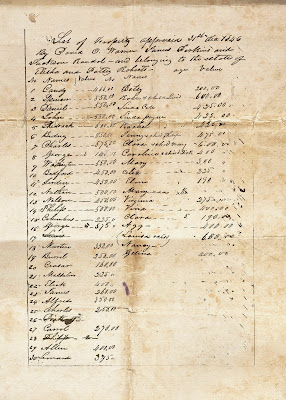 List of property appraised 31st dec 1846 By David O. Warren James Perkins and Jackson Randol -- and belonging to the estate of Elisha and Patsey Roberts --


These names are being listed here with the hope that there are researchers who will be assisted in their journey to find their ancestors by the sharing of the names of these individuals . . . this list is made available thanks to the research efforts of Elisha and Patsy's great-great-granddaughter, Esther . . . thanks a bunch cousin Esther!

Posted by BeNotForgot at Tuesday, December 31, 2013 No comments:

Blog Caroling :: I Heard the Bells on Christmas Day


On Christmas Day 1863, J.M. Hall will make reference to their Christmas jollification . . . and will state that all went off as merry as a marriage bell . . .


Meanwile, almost two thousand miles away, while listening to the church bells of Cambridge, Massachusetts toll out the glad tidings of Christmas Day . . . Henry Wadsworth Longfellow picks up his pen and writes the following words . . .


I heard the bells on Christmas day
Their old familiar carols play,
And wild and sweet the words repeat
Of peace on earth, good will to men.

And thought how, as the day had come,
The belfries of all Christendom
Had rolled along the unbroken song
Of peace on earth, good will to men.


Till ringing, singing on its way
The world revolved from night to day,
A voice, a chime, a chant sublime
Of peace on earth, good will to men.


Then from each black, accursed mouth
The cannon thundered in the South,
And with the sound
The carols drowned
Of peace on earth, good-will to men!


It was as if an earthquake rent
The hearth-stones of a continent,
And made forlorn
The households born
Of peace on earth, good-will to men!


Then pealed the bells more loud and deep:
“God is not dead, nor doth He sleep;
The wrong shall fail, the right prevail
With peace on earth, good will to men.”

The following video gives a version of the story behind those words, as told by Edward K. Herrmann and the Mormon Tabernacle Choir . . .


On this date in our family history . . . the 19th day of December . . . in the year 1878 . . . Mary Olive and W.A. Muston are married in Crenshaw County in the State of Alabama . . . this Mary and William are 2nd great-grandparents of the Keeper of this family history blog . . . by 1890 they are in Texas and have had at least three sons . . . in June of that year it is adjudged that the said Mary E. Mustin is a Lunatic, and it is ordered by this court that she be conveyed to the Lunatic Asylum at Austin, County of Travis, for restraint and treatment . . . at least one more child would be born, a daughter, in January of 1893 . . . after that date, no further record has been found of our Mary Olive's existence . . . 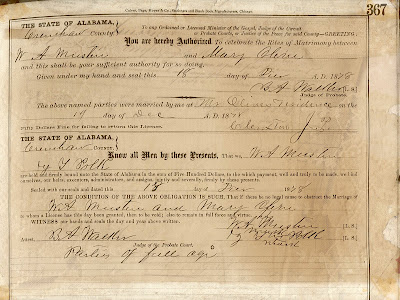 Posted by BeNotForgot at Thursday, December 19, 2013 No comments: