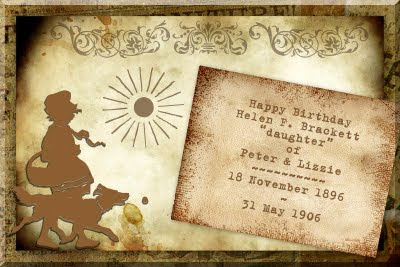 For many years, it was believed that Peter and Lizzie were the birth-parents of Helen's older "sister" -- Eva May Smith (1874-1936) -- until the family lore from Maine was passed on to the Texas descendants that Eva May was actually the daughter of Lizzie's younger sister, Phoebe (1848-1927). Eva May is a maternal great-grandma of the Keeper of this blog.

Even before receipt of this info -- due to the age of Peter and Lizzie at the time of Helen's birth, as well as the gap of almost 23 years between the birth of their two "daughters" (and only children) -- there were questions about Helen's true parentage.

She is enumerated on the 1900 census as 3-year-old Hellen Brackett. And there is a small grave-marker for this little one sitting beside the tombstone of Peter and Lizzie. Engraved on it are the following words :-

That is all we know at this time. Little Helen needs to be researched further . . . her findagrave memorial page

begotten and not forgotten . . .

Posted by BeNotForgot at Friday, November 18, 2011 No comments: 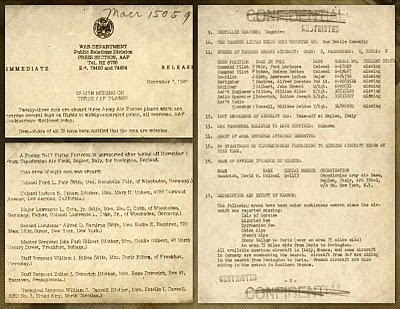 On this date in our family history . . . the 1st day of November . . . in the year 1946 . . . William Allec Hilton and his seven crewmates boarded a B-17 Flying Fortress at Capodichino AirField in Naples, Italy, and flew out, heading for Bovington, England . . . they never arrived . . . the following areas were diligently searched . . . Isle of Corsica, Ligurian Sea, Tyrrhenian Sea, Swiss Alps, Frech Alps, Rhone Valley to Paris (over an area 75 miles wide), an area 75 miles wide from Paris to Bovington . . . all available American aircraft in Italy, France, and some aircraft in Germany conducted this search . . . aircraft from RAF also aided in the search from Bovington to Paris . . . French aircraft also aided in the search in Southern France . . . these searches continued for 18 days . . . they were futile . . . more than nine months later . . . on the 25th day of July 1947 . . . a patrol of the 99th Infantry Battalion Alpine discovers the remains of the aircraft on the mountain Aiguille Glacier, a glacier at 3750 meters, 15 miles southwest of the summit of Mont Blanc . . . some aircraft debris and human remains identify the device . . . the causes of the accident appear to be related to bad weather . . . at the scene of the accident, a propeller blade stuck in the rock where the plane crashed serves to climbers as a place to hang their ropes . . . this William is a son of Isaac Cleveland Hilton (1888-1947) and Louisa Hooper Hilton Roberts nee MUSTON (1893-1973) . . . and he is a 1st cousin twice removed to the Keeper of this geneablog . . . visit William's findagrave page to view the monument at Arlington National Cemetery listing the names of the members of this crew . . . the recovered remains were buried here on 10 October 1947 . . . FYI . . . some of this information was translated by Google from a French internet page . . .

Posted by BeNotForgot at Tuesday, November 01, 2011 No comments: