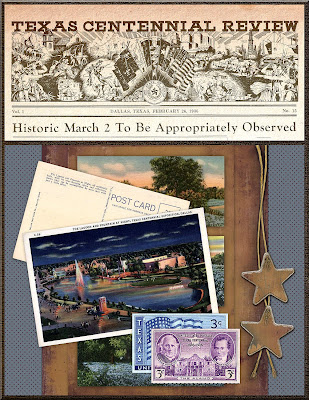 Gorgeous, as always! Love the narrative, as well.

Wow wow --- This is the time and place I have been hanging out lately as I search for more information on a great, great grandfather. Wow I have been learning about that "wild wild Texas" it's many battles and history...... Thank you forbringing this special event to our attention. And great backdrop, it is beautiful.

Thank you once again for sharing your creativity, Vickie!
A Festival of Postcards (7th Ed.) Light, was published earlier today and you can find your entry in the first section here -
http://wp.me/pp92w-850
Evelyn in Montreal
Don't forget, when you have a moment, to copy the shortlink into your post to aid in navigation. Thanks!

Thanks Evelyn . . . your Festival looks like such a hugs task . . . another wonderful job, as always. Glad you reminded me about the link . . . I intended to do that this a.m. when you posted on Facebook . . . but got sidetracked!

Tonia, glad you enjoyed! :) Ruth, thanks for stopping by. Do let me know if you ever connect your Texas folk to any of mine.

Very effective way to display. I really must try to do something like this but my artistic skills are close to nil.

Happy Blogoversary! Three years is quite an accomplishment!