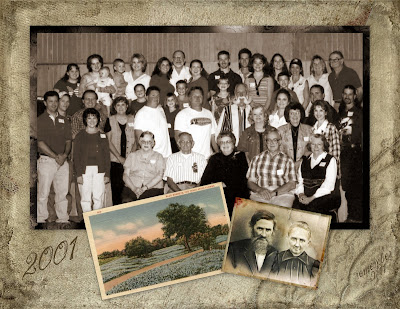 On this date in our family history . . . the 20th day of October . . . in the year 2001 . . . descendants of the children of William Paschal Henry and his wife, Josephine Wingfield Henry nee Davis, gathered in Milam County, Texas for a family reunion . . .

I stopped by the cemetery recently, shortly after the 11th of September, to put a new American flag near your grave marker. As I fixed in place that small star spangled banner, I wondered what you, a Confederate veteran of the civil war that was fought in these United States, would have to say about the events going on in our world today.

When I visit that cemetery, I can almost see you and the family members gathering there on the autumn day in 1899 when you buried your wife of 35 years. How sad you must have been at the funeral on that Sunday afternoon. From the family lore that has passed down through the generations, I can only imagine the anger and frustration you and your children must have felt at that time.

I have read the two articles that ran in the Nov. 1, 1899 edition of The Rockdale Reporter the week following Josephine's death. The story tells how her buggy was involved in a collision with a wagon, but that the occupants of the wagon claimed they did not realize she had been thrown from the buggy, and hence did not stop to render aide.

The unidentified reporter goes on, in rather graphic detail, to tell of the deplorable tragedy of the death of my g-g-grandmother....


When she was found ... she was lying across the axle dead, with her hair and clothing wound around the spindle of the buggy.... The road over which she went showed where her limbs had been dragged from the point where the collision occurred to the place where she was found....

Family lore says that Josephine was often called upon to tend to ailing friends. They say that was what she was doing on that autumn afternoon toward the end of the 19th century. I often wonder if she picked up her medical leanings from working with her brother-in-law, Milton Antony, M.D., when he was a Confederate surgeon in Brazoria Co.


I have so much more I would like to talk to you about, and the list of questions I would like to ask is endless, but to sum it up, I'll simply borrow a few lines from a popular song of The Judds from a few years ago ...

Grandpa, tell me 'bout the good old days
sometimes it feels like this world's gone crazy
and Grandpa, take me back to yesterday
when the line between right and wrong
didn't seem so hazy

By the way, we had a little family gathering of our own, Grandpa, on the 20th of October this year. Although the majority of us were descendants of your son, Edgar and his wife Berta Mary (Sharp) Henry, Bert and Arlene Henry also joined us, representing your namesake, William Paschal Henry, Jr. and his wife, Annie (Calvert) Henry.

I thought of y'all that day as I drove into town along the old Cameron highway which crosses the former path of the San Antonio & Aransas Pass Railroad. Haven't quite figured out yet just exactly what strip of land you sold to them for one dollar, but we've definitely got it narrowed down.

Haven't had much luck finding living descendants of your son, Jerome Bonaparte Henry and his wife Sudie, or descendants of your twin daughter, Emma (Henry) Sharp and her husband Sam. I was in touch with Emma's grandson, Stuart Leaverton, but I guess you know he died earlier this year, as did Edgar's granddaughter, Georgia Faye (Henry) Kaseberg. We sure do miss them. We also keep in touch with Ella (Henry) and Jim Hamilton's descendants, but they weren't able to join us this year.

Anyway ... we plan to get together again as an extended group on Saturday, October 19, 2002. Your great-granddaughter, Susie (Henry) Aigner, and crew will be in charge of that one.

We'll be thinking of you. And thank you ... for everything.

With love,
Your great-great-granddaughter

Posted by BeNotForgot at Saturday, October 20, 2001