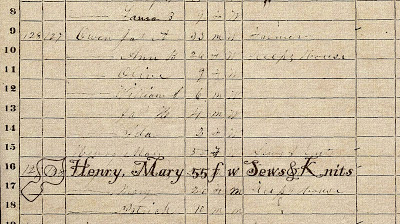 Mary is enumerated in the household of her only daughter, who is listed here as Ann B Owen . . . this "Sewer & Knitter" is known to have had two sons, William and Francis . . . her first-born son, William Paschal Henry (1836-1912), left Kentucky and wound up in Texas sometime before 1860, mayhaps by way of Missouri . . . it is believed that she never saw him again once he left Kentucky . . .

This William is a 2nd great-grandpa to the Keeper of this family history blog . . . he had settled in Milam County (in central Texas) before 1880 and remained in that area until his death in 1912, when he was laid to rest beside his wife at the Pleasant Grove (aka Murray) Cemetery . . .

The dates of death and burial locations of his parents, Thomas Henry and Mary Kirtley, remain unknown to us at this time . . .

I love it! I don't know if this was her profession and she earned money for her work or if it was an indication how she spent her time without receiving money for sewing and knitting. Wouldn't it be wonderful if more census records for women included entries like this?! I would have liked my census record (had I been alive in 1870 and doing what I'm doing now) to say family historian, quilter, and sewer. Thanks for sharing. Great find!

I sooo agree, Nancy! That is the first time I have found this type of "occupation" for one of my female ancestors . . . and it does help to create quite a nice visual image of this great-grandma of mine! :)