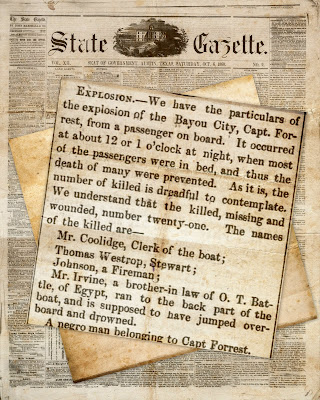 On this date in our extended family history . . . the 27th day of September . . . in the year 1860 . . . Oliver Lazarus Battle is a passenger in the Gulf of Mexico on board the steamboat Bayou City . . . she is bound from Galveston to Houston, and when about to make a landing at Lynchburg, her boilers burst with terrific explosion and fearful result . . . among those who die as a result of that explosion is Oliver's brother-in-law, I.T. Irvin, Speaker of the Georgia House of Representatives . . . Irvin was last seen rushing aft, and it is believed he jumped overboard and was drowned . . . this Oliver Battle is a 1st cousin five times removed to the Keeper of this family history blog . . . many news clippings about this tragic event are available online, including a lengthy article in the State Gazette. (Austin, Tex.), Vol. 12, No. 9, Ed. 1, Saturday, October 6, 1860 . . . P.S. . . . Oliver's mother, Margaret Fannin Battle King nee Porter, was the stepmother of James Walker Fannin . . .

Posted by BeNotForgot at Friday, September 27, 2013