Texas is the finest portion of the Globe
that has ever blessed my vision.

The above poetic statement was penned by Sam Houston in an 1833 letter to a cousin, shortly after Sam had crossed the Red River and stepped onto Texas soil for the first time, i.e. . . .


On December 2, 1832, an imposing figure stood on the north bank of Red River. His passport read: "General Sam Houston, a Citizen of the United States, thirty-eight years of age, six feet, two inches in stature, brown hair, and light complexion."


Sam would soon become a frequent visitor in the homes of some of the men later described by Alexander Horton as . . . some of the noblest men to be found in any county. They (were) generous, kind, honest and brave . . . Elisha Roberts* . . . Philip A. Sublett* . . . These were the most earliest settlers of East Texas. . . .


*This Elisha is a 4th great-grandpa to the Keeper of this family history blog . . . Sublett is married to Elisha's daughter, Easter Jane . . .


Before Sam left Tennessee, he served as a commander in the Tennessee volunteer militia of General Andrew Jackson during the War of 1812 . . . among those serving under Sam were the Parker brothers, Daniel and Isaac . . . by August of 1833, this Daniel and Isaac were members of a wagon train leaving Illinois, their destination being Texas . . . regarding the people on this wagon train (including a young girl known as Cynthia Ann), according to Glenn Frankel in his book, The Searchers, The Making of an American Legend . . . 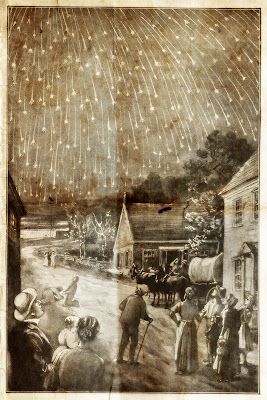 In mid-November they reached the brown, placid Sabine River, bordered by pine trees as tall and erect as sentinels, and crossed over into Texas. They camped that first evening, November 12, 1833, near San Augustine, twenty miles deep inside their new promised land, just in time for one of the most awesome celestial events in human history.

On the Night the Stars Fell, the heavens blazed with shooting stars as large as moons trailing clouds of bluish light like divine afterthoughts. Although well past midnight, the bright burning sky illuminated the wide, awestruck faces of the pilgrims as if it were high noon. . . .

As it happens, during the year the stars rained all over the sky, Grandpa Elisha and a large assortment of his kith 'n kin lived near San Augustine, just about Twenty miles deep inside their new promised land . . . i.e., just east of San Augustine and about 20 miles west of the Sabine River . . . so it is quite possible this group of travelers actually camped on land owned and / or occupied by some of our Roberts kith or kin . . . 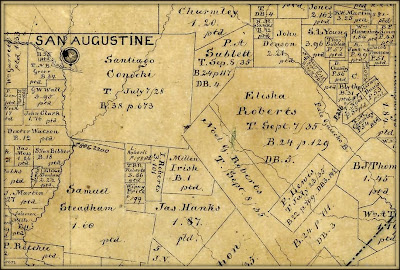 Meanwhile, in another part of Texas in 1833 . . . a family by the name of O'Docharty is residing in San Patricio County during this year of the Plenty Stars Winter . . . as the years passed and their lives on this earth came to an end, many of these family members were laid to rest in the Old Cemetery on the Hill (FYI, it is believed by some that our Elisha's son-in-law, Bryant Daughtry, might be buried in the same cemetery) . . . the matriarch of the O'Docharty family was Susanna, who was tall and slender with a shock of red hair . . . it has been said of her that she accurately predicted her own death . . . the following is a portion of what is referred to as her epitaph . . . it is from a collection of stories handed down through generations by oral tradition . . .

And now I lie with them upon this hill
Mingling with Texas earth as seasons come and go.
Chilling northers bend grasses almost to the ground;
Low-hung clouds are misty blankets
Dropping days of rain upon the earth.

Then wild flowers make sweet the air in spring;
At dawn birds chirp and trill as if to wake us,
But we lie immutable, insensible to summer heat and winter cold . . .
While we lie here a segment of a forgotten colony.

Here I lie beside my own --
A hundred springs have come and gone
Since first I lay upon this lonely hill. . . .

This blogpost was researched and prepared specifically for The Fifth Annual Great Genealogy Poetry Challenge over at cousin Bill's blog which is known as . . . West in New England . . .

INTERESTING STORY OF THE METEORIC SHOWER OF 1833.

By a Special Contributor.*

. . . It was in 1833 that North America was treated to the most famous meteoric shower on record.

My post of observation was on Bayou Coti, a tributary of Red River, in Western Louisiana. [i.e., not far from San Augustine] . . .

On the evening of the 12th of November, . . . I opened the door, and for a moment stood in speechless astonishment, contemplating the bewildering scene.

Darting downward from a southeasterly direction, as though driven by a light wind, though the air seemed perfectly still, thick as snowflakes on a winter's night came innumerable balls and points and streams of light, as though all the starry hosts of heaven were making a descent upon the earth.

It was truly a grand, not to say an appalling, spectacle. The grandest display of fireworks man can conceive would give but a faint idea of the magnificent scene.

Amid the lesser lights that seemed to be drifting before a breeze were immense balls of fire that, darting downward as if to consume the earth, noiselessly exploded in mid-air, leaving a long, luminous train that in some instances was visible for many minutes. . . .

How long the display had been in process I do not know, as it was only when the overseer's horn aroused the quarters that it was discovered.

Excepting the sharp change in temperature there was no atmospherical disturbance whatever attending the manifestation.

When twilight again brought out the familiar twinklers, each in its accustomed place, the Seven Stars all there, and not a nail missing from "Job's Coffin," , , ,

I shall not sit up to watch for the meteoric shower on the coming 12th of November [1899], but should it actually appear it will well repay those who do.

*Peculiar and pathetic interest is added to this article by the fact that the author died soon after it was written, at his home in Santa Ana.

Another of the Half Century Readers of The News Passes Away.

From Santa Ana, Cal., The News has received the following: