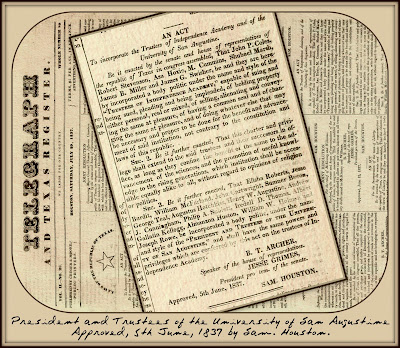 AN ACT
To incorporate the Trustees of Independence Academy and of the
University of San Augustine.

Be it enacted by the senate and house of representatives of the republic of Texas in congress assembled, That John P. Coles, Robert Stevenson, Asa Hoxie, M. Cummins, Shubael Marsh, James B. Miller and James G. Swisher, be and they are hereby incorporated a body politic under the name and style of the "Trustees of Independence Academy," capable of suing and being sued, pleading and being impleaded, of holding property either personal, real or mixed, of selling, alienating and conveying the same at pleasure, of having a common seal and of changing the same at pleasure, and of doing whatever else that may be necessary and proper to be done for the benefit and advancement of said institution, not contrary to the constitution and laws of this republic.


Sec. 2. Be it further enacted, That this charter and privilege shall extend to the said trustees and their successors in office, as long as they confine the benefit of the same to the advancement of the sciences, and the promotion of useful knowledge to the rising generations, which institution shall be accessible equally alike to all, without regard to opinions of religion or politics.


Sec. 3. Be it further enacted, That Elisha Roberts, Jesse Burdit, William McFarland, John Cartwright, Sumner Bacon, George Teal, Augustus Hotchkiss, Henry W. Augustine, Andrew J. Cunningham, Philip A. Sublett, Iredell D. Thomas, Albert Gallatin Kellogg, Almanzon Huston, William W. Holman and Joseph Rowe, be incorporated a body politic, under the name and style of the "President and Trustees of the University of San Augustine," and shall have the same powers and privileges which are conferred by this act on the trustees of Independence Academy.