Give Their Face a Place 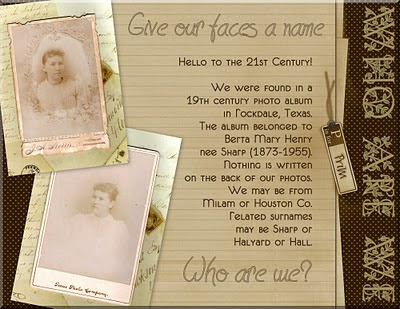 Hello to the 21st Century! We were found in a 19th century photo album in Rockdale, Texas. The album belonged to Berta Mary Henry nee Sharp (1873-1955). Nothing is written on the back of our photos. We may be from Milam or Houston Co. Related surnames may be Sharp or Halyard or Hall. Who are we? [pssttt . . . if you click on our collage you will be able to view an enlarged version of us in a new window . . . ]

The lovely ladies pictured above are looking for their identities. They once lived in a late 19th-century photo album that belonged to my great-grandma, but I never met them until many years after she was gone [I was four when she died]. If the granddaughter who was the last keeper of this album ever knew who they were, she had forgotten by the time she shared these images with me shortly before her death. Most of the photos in the album are family members who are identified on the back of each image, but there are several that have absolutely nothing written on them.

The photo in the upper left shows it was taken by a Traveling Photographer by the name of J.A. Morris. I do not know if this is the same man, but a Google search turned up the following newsclipping from Oklahoma --

Friday afternoon a dead stranger was found in the bed of Dumpling creek south of Antlers by Garney Polk who reported his find to the county officers at Antlers. An examination of the man was made and it is believed that the stranger was James Morris, as an envelope bearing that name was found in his coat pocket.

Monday afternoon two men giving the name of Morris came up from Hugo, to investigate and they gave such an accurate description of the man that it is believed he was a brother of theirs. They stated Morris was a traveling photographer and usually carried several letters for identification, a pocketbook and his camera and was always well dressed. The body when found was poorly dressed and had no means of identification other than the envelope. Sometime about Christmas Morris was put off the night southbound train at Hamden, south of Antlers, and at that time had no camera and was dressed as he was when found. He bought a box of ginger snaps at Hamden the next day and left town. That was the last time he was seen alive.

The parties from Hugo will disinter the body and move it to Hugo where it will be reburied. – Antlers American.

The other photo has the words Texas Photo Company below the image. I have found no information on this photographer.

In celebration of Women's History Month, the theme for the March 2010 version of footnoteMaven's Smile For The Camera is Give Their Face A Place. For this 21st Edition, we were asked to picture women back into history . . . the unknown, known and unsung women who are often the foundation of our family history.


FYI . . . the "prim" background for this collage is actually a free blogger background from Daisy Gray Design . . .

I hope you find out who these women are! Beautiful digi-scrapping! Interesting article too!

Thanks Cheryl . . . every single identified photo in that album is a family member . . . so I tend to think these lovely ladies are also . . . we shall see!