A Tribute to Our Mahala for the CoG 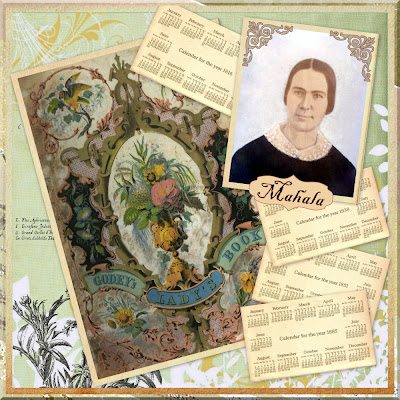 On the 22nd day of March . . . in the year 1838 . . . in San Augustine County, Texas . . . 21-year-old Mahala Lee Roberts becomes the bride of John M. Sharp. John and Mahala will become the parents of a son and a daughter whose exact birth dates are still unknown . . . and then, before 1850, John's existence will simply slip away . . . into an oblivion still hidden from this branch of his descendants.

Our family had rather vague tidbits of information about Sam for many years, but Mahala's very existence was completely unknown to us . . . other than being the anonymous (faceless and nameless) mother of our Sam . . . until a little over eleven years ago.


Being a person who has been sort of doing genealogy for most of her life (me), the relatively recent introduction to our Mahala came as a complete surprise. How, you may ask, did we finally connect after so many years of never meeting each other? Well, it went kinda like this. . . .

A little over a century later . . . in September of 1998 . . . descendants of Josephine and William were receiving a newsletter containing final details for a Henry Family Reunion to be held in October. Among those descendants was one of their great-grandsons, Stuart Arlington Leaverton (1908-2001) of Oklahoma, who was kind enough to call me upon receipt of the newsletter, expressing his regret in not being able to attend.


Stuart's mother, Alice Alexandria Leaverton Reynolds Campbell nee Sharp (1889-1966), was a daughter of Emma and Sam, and was actually a double first cousin to my maternal grandpa, Robert E. Henry (1905-1976) . . . which made Stuart my double 2nd cousin once removed. Anyway . . .


In the course of our telephone conversation, Stuart asked me if I knew about a 1962 legal document that actually contained answers to some of the questions I had posed in the newsletter. I did not! We hung up with him agreeing to put a copy in the mail.


The anxiously awaited packet arrived on Thursday, October 8th, 1998 . . . containing, among other items, a copy of a 1962 Deposition of Ida Mae Halyard nee Sharp (1871-1964), an older sister of Berta Mary . . . and thus began my introduction to our Mahala and her extended family.


Not long after receiving that packet of information, I posted the entire deposition on a genealogy message board for Houston County, Texas. More than six months later, I received a response from a lady in Lake Jackson, Texas, letting me know that we were kinfolk. We struck up a correspondence, and in January of 2000 arrangements were made for me to visit her in her home. Besides meeting a perfectly delightful and generous and knowledgeable half 2nd cousin twice removed, I was also introduced to the photo you see here of our Mahala, as well as a mid-19th century journal which frequently mentions our kith 'n kin. And I now know that . . .

Mahala Lee Roberts was born on the 3rd of November 1816 in Washington Parish, Louisiana. Her father was Elisha Roberts, born ca. 1774 at Watauga Settlement in Hawkins County, Tennessee. Her mother, Martha Gill aka Patsy, was born ca. 1781 in Bedford County, Virginia. Elisha and Patsy married in Green County, Kentucky in 1800, and were in Washington Parish, Louisiana before the birth of their son, Noel, in 1813. This family was living in the Redlands of East Texas by 1826 . . .

We now have an amazing amount of detail on the lives of this family unknown to us before the autumn of 1998. A detailed timeline of the decades of Mahala's life is posted > HERE <. Directly below, you will find links to previous blogposts about Mahala, arranged in chronological order.

The topic for this edition of the Carnival of Genealogy is: A Tribute to Women! March is women's history month and a great time to honor the women on our family trees. This is the 4th annual edition on this topic so we're going to change it up just a bit to keep it fresh. Write a biography about a woman on your family tree starting with a timeline of their life. The timeline can be a separate post that you link to from your biography (which can itself be a series of articles) but please just submit one post to the COG. If you haven't written from a timeline before you may find it a great learning / research experience! Since this topic will likely require more research and writing time you'll have a full month till the deadline. There will be no March 1st edition of the COG. The deadline for submissions will be March 15th. Thirty submissions will be accepted. Submit your blog article to the next edition of the Carnival of Genealogy using our carnival submission form. Please use a descriptive phrase in the title of any articles you plan to submit and / or write a brief description / introduction to your articles in the "comment" box of the blog carnival submission form. This will give readers an idea of what you've written about and hopefully interest them in clicking on your link. Past posts and future hosts can be found on our blog carnival index page. Thanks for the posters, fM!

Vickie, boy-o-Boy, am I going to have fun with this one. You are going to keep me busy for a bit as I follow your trail with Mahala. thanks for a good story.

Vickie you did a terrific job with your detailed outline! I'm very impressed with what you were able to put together.

Mahala certainly lived through some of America's most significant historical events. The family history is interesting too. Mahala had 2 granddaughters born on her birthday, Nov. 3. That's my birthday too :-)

I really like how you incorporated previous posts into your timeline, pulling everything together to tell the story of your Mahala. Nice job!

Great post, with a wondeful weaving of history and family history. And I absolutely love the scrappage!

You are one of the most thorough researchers around, Vickie. You have given me such a great picture of Mahala, I've enjoyed reading every word. You've made us all want to go to everyone of your links and stay on your blog for hours! Good job.

Joan, guess I should have offered a prize to anyone who actually read every bit of this . . . I did not realize I had so much info on our Mahala!

Jasia, this was such FUN for me to do! I use Family Tree Maker 16 (haven't quite figured out FTM 2010 yet) and enter all census, etc. data as a "Timeline" entry. It organizes itself in date order . . . and when I run across dates from wills, baptisms, etc. I make a Timeline entry for those also. So I had the basics in order . . . just had to flesh them out and add links, etc.

Thanks for the CoG!

Nancy, glad you stopped by to meet our Mahala!

Judith, so glad you stopped by for a visit . . . gotta luv all that Texas history . . . and it has been quite a journey, getting to know our Mahala . . . and I found a few more tidbits at the Center for American History in Austin! She just keeps on revealing herself to me . . .