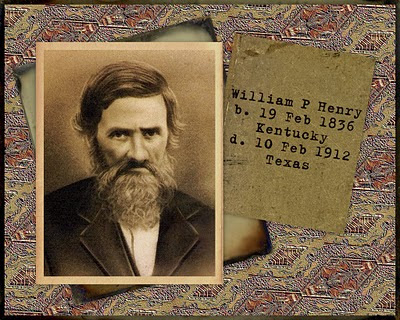 On this date in our family history . . . the 10th day of February . . . in the year 1912 . . . William Paschal Henry, Sr. died in Milam County, Texas . . . it was a Saturday, and he was laid to rest that same day beside his Josephine . . . in a small country cemetery that is now known as the Murray Cemetery . . . this Wm. P. Henry is a 2nd great-grandpa to the Keeper of this family history blog . . . he was remembered in the local newspaper in the following manner . . .

How uncertain and inscrutable are the ways of providence; how our hearts are made to grieve at the "unlooked for" blow of that terrible monster death. When it strikes our loved ones, when it takes from us that one whom we feel that we can the least spare.


Such is the affliction that has befallen the children, grandchildren and friends of the late W. P. Henry, who died at his home February 10, 1912, after a few day's illness of pneumonia. Grandpa was sick only a few days, and all that medical skill and tender nursing could do was done, but to no avail.


From the first the death angel hovered nigh, and though at times the star in the crown of hope would brighten, it was apparent all along that his pure and perfect life would have to pay the forfeit. So early Saturday morning about four o'clock all pain ceased; the battle was over and his pure spirit returned to the god who gave it.


Yes, Grandpa is gone for a little while only, and no words can portray, no mortal can realize the depths of despair into which those who loved him have been plunged. No words can console them, but listening loved ones will hear the fluttering of a wing and an angel softly whisper, "I am better now, safe in the arms of Jesus, where suffering is no more."


Funeral services were conducted at five o'clock Saturday evening by Rev. J.D. Shelton, his beloved pastor, after which the remains were laid to rest in Pleasant Grove cemetery beside his dear wife, who had preceded him to that great beyond some twelve years.


Peace to his ashes.

Posted by BeNotForgot at Thursday, February 10, 2011

I love what was written for him in your local newspaper...wonderful tribute.

Pneumonia took my great grandmother when she was only 34 and her daughter (my grandmother), age 10, was left bereft. I would have been dead many times over without modern surgery and antibiotics. And I'm very healthy in general! Our ancestors had so many more burdens to bear. Beautifully-created photo.

Thanks for stopping by, Gini & Linda . . . my Mom found that obituary for me several years ago . . . the Rockdale public library has / had copies of old Rockdale newspapers on microfilm dating back to 1899 . . . I could camp out there for a week (or more) just browing around in those old papers . . .