On this date in our family history . . . the 16th day of October . . . in the year 1675 . . . Isaac Botts is "One of the two who fell in the little swamp near the house." . . . this Isaac as well as the Benoni Hodsdon mentioned in the Plaisted letter are both 9th great-grandpas to the Keeper of this family history blog . . . 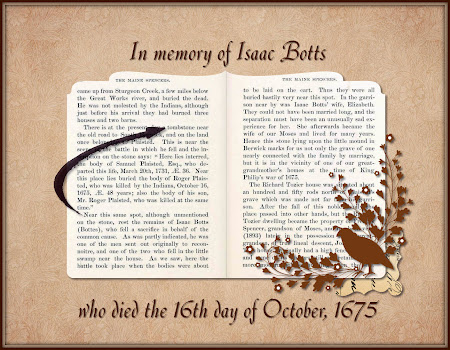 About an arrow-shot from Salmon Falls mill was the home of Elizabeth Botts and her first husband, Isaac. Here they owned twenty acres of land bordering upon Salmon Falls brook. . . .


Their movable possessions were meagre and for utility instead of decoration. The whole list comprises: a hog, a chest, an ax, some small dishes, an iron pot, a frying-pan, a spinning wheel, a saddle, and a harrow. This shows with how few luxuries young married people of 1675 could find life worth living, and enjoy it at the same time. . . .


With Isaac and his wife was their only child, Elizabeth, who was but a few years old. She afterwards married Samuel Brackett of Berwick, and lived on a farm adjoining her mother's later homestead. . . .


Near this same spot [the grave of Plaisted], although unmentioned on the stone, rest the remains of Isaac Botts (Bottes), who fell a sacrifice in behalf of the common cause. As was partly indicated, he was one of the men sent out originally to reconnoitre, and one of the two who fell in the little swamp near the house. As we saw, here the battle took place when the bodies were about to be laid on the cart. Thus they were all buried hastily very near this spot.


In the garrison near by was Isaac Botts' wife, Elizabeth. They could not have been married long, and the separation must have been an unusually sad experience for her. She afterwards became the wife of our Moses [Spencer] and lived for many years.


Hence this stone lying upon the little mound in Berwick marks for us not only the grave of one nearly connected with the family by marriage, but it is in the vicinity of one of our great-grandmother's homes abt the time of King Philip's war of 1675. . . . The Maine Spencers

Posted by BeNotForgot at Thursday, October 16, 2014