On this date in our family history . . . the 12th day of October . . . in the year 1915 . . . Margaret Antony nee Davis dies in Dallas, Texas . . . it has been said of Margaret that she was . . . an estimable lady, a descendant of an old and honorable family of middle Georgia, daughter of Milton Grant Davis, who was a prosperous planter of antebellum days and cousin of ex-Governor Hubbard of this State. . . . this Margaret is the older sister of Josephine, who is a 2nd great-grandma of the Keeper of this family history blog . . . 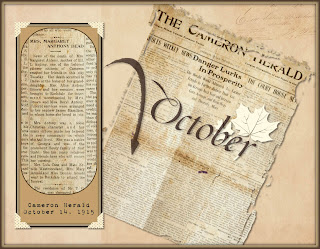 News of the death of Mrs. Margaret Antony, mother of Ed. L. Antony, one of the beloved pioneer citizens of Cameron reached her friends in this city Tuesday. Her death occurred in Dallas at the home of her granddaughter, Mrs. Alice Antony Brown and her remains were brought to Rockdale for interment accompanied by Mrs. Brown and Miss Beryl Antony. Funeral services were arranged by her nephew James Hamilton, in whose home she loved to visit. Miss Antony was a noble Christian character and her many virtues made her beloved in every community in which she had lived. She was a native of Georgia and was of the prominent Henry family [sic, i.e., Davis family] of that State. She has many relatives and friends here who will mourn her passing. Mrs. Lula Cass and Miss Estelle Westmoreland, Mrs. Mary Arnold and Miss Bennie Arnold went to Rockdale to attend the funeral. The Cameron Herald, October 14, 1915