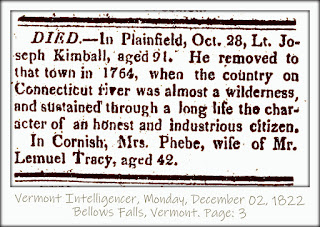 On this date in our extended family history . . . the 28th day of October . . . in the year 1822 . . . ninety-one year old Joseph Kimball dies in New Hampshire, and is laid to rest in the Gilkey Cemetery . . . more than a month later, his death is reported in a Vermont newspaper . . . this Joseph is a third cousin eight times removed to the Keeper of this family history blog . . . 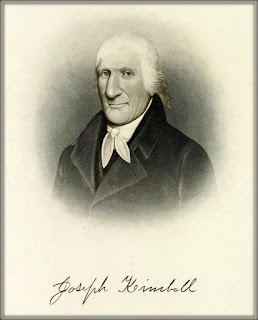 This is a 19th century sketch* of cousin Joseph . . . Joseph's future grandson-in-law, Dr. Elias Frost, had moved to the neighborhood ca. 1808 . . . and it is recorded that it was Elias who convinced Joseph to have his portrait done . . . it is written of cousin Joseph that . . . "He was a soldier in the Revolution, and took part in the battles of Fort Ticonderoga and Bennington. . . . He settled first in the town then known as Plainfield Plain, and later removed to a farm near the village of Meriden, New Hampshire, where he lived until his death."

*Unfortunately, various versions of this portrait [with the name cropped off] have been widely distributed in the genealogy community as representing the image of the RICHARD KIMBALL who died in 1675 in Ipswich, Massachusetts . . . e.g., more than 250 versions of this portrait are now attached to hundreds and hundreds of trees on Ancestry dot com and incorrectly identified as RICHARD KIMBALL . . . this RICHARD KIMBALL is my 10th great-grandpa . . . and the extent of this case of misidentification came to my attention just recently when somebody posted a version of Joseph's portrait to RICHARD KIMBALL's findagrave page, which I currently manage . . . findagrave admins have since removed that portrait of Joseph from Richard's page . . . source of the portrait . . . Genealogical and family history of the state of New Hampshire . . .

Posted by BeNotForgot at Wednesday, October 28, 2020