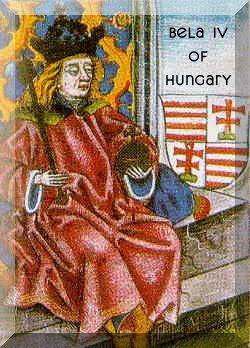 . . . The last years of Bela's life were embittered by the ingratitude of his son Stephen, who rebelled continuously against his father and ultimately compelled him to divide the kingdom with him, the younger prince setting up a capital of his own at Sarospatak, and following a foreign policy directly contrary to that of his father. Bela died on the 3rd of May 1270 in his sixty-fourth year. With the people at large he was popular to the last; his services to his country had been inestimable. He married, while still crown-prince, Maria, daughter of the Nicaean emperor, Theodore Lascaris, whom his own father brought home with him from his crusade. She bore him, besides his two sons Stephen and Bela, seven daughters, of whom St Margaret was the most famous. From the 1911 Encyclopedia.

How amazing and totally cool. I wonder what it would have been like back then? How fortunate and wonderful that you have found this story of your family.