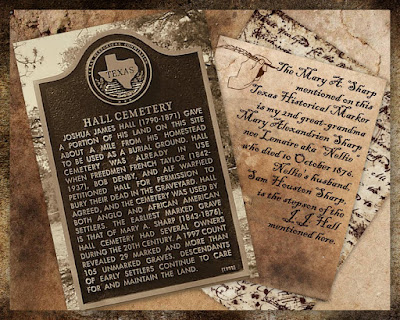 A Texas Historical Marker at the Hall Cemetery in Houston County, Texas indicates that the earliest marked grave is that of this Mary A. Sharp (1843-1876) . . . the historical marker is located on FM 229, 10.9 miles NW of Crockett . . . although the fact that our Nellie had a tombstone is documented on this historical marker, as well as in a 1962 deposition given by one of Nellie's daughters, no evidence has been found of the location of her grave . . .

Hall Cemetery. Joshua James Hall (1790-1871) gave a portion of his land on this site about a mile from his homestead to be used as a burial ground. Hall Cemetery was already in use when freedmen French Taylor (1842-1937), Bob Denby, & Alf Warfield petitioned Hall for permission to bury their dead in the graveyard. Hall agreed, & the cemetery was used by both Anglo & African American Settlers. The earliest marked grave is that of MARY A. SHARP (1843-1876). Hall Cemetery had several owners during the 20th century. A 1997 count revealed 29 marked & more than 105 unmarked graves. Descendants of early settlers continue to care for & maintain the land. (1998).

Sketchy family lore says that Nellie's father was a French gentleman by the name of Mr. Lemaire . . . sometimes written as Lamar (see further discussion below) . . .

Nellie's mother, Elizabeth A. Lemaire Beale nee Waring, was born ca.1824-1827 in Maryland . . . she is the daughter of Edward Gantt Waring and his wife (and 2nd cousin), Catherine Ann (Kitty) Waring nee Waring . . .


France is the first European power to recognize the independence of the Texas Republic. A treaty is proclaimed between France and the Republic of Texas in 1840, and continues until 1846. A French chargé or minister is sent to the Republic, and plans are made for sending French colonists to Texas.

Notes -- as per Aunt Ida (Sharp) Halyard . . . My mother, Mary Alexandren Lamar Sharp, was born in France [sic] & was of French extraction, but I know nothing about her family history, except that she owned land on the Robeson Survey, Liberty County, Texas, & I still own my inherited interest in this land. My mother died when I was four years old, & is buried in the Hall Cemetery on the old Hall Plantation on Elkhart Creek, where I was born. There is a marker at her grave.

Not many have ancestors who were the first burial in a cemetery. A lonely distinction, although I doubt Mary was aware of being alone! And what a lot of information you have! Congratulations!

Thank you so much for visiting. I find your blog to be fascinating! Thank you for dropping by, you can be sure I'll be back again here. ((hugs))