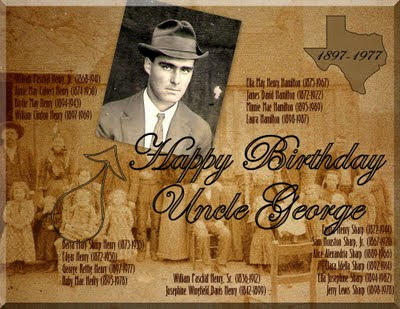 George Rettig Henry was born on this date . . . the 21st day of August . . . in the year 1897 . . . in Milam County, Texas. He was the 1st-born son of Edgar and Berta Mary (Sharp) Henry . . . the Keeper of this family history blog knew him as "Uncle George" but he was actually a grand-uncle aka older brother of maternal grandpa . . . Uncle George and Aunt Ruth lived sorta catty-cornered behind our house when we were growing up . . . we could walk through the pasture to get to their back door, which was always open . . . Aunt Ruth's coconut pie is frequently requested for family gatherings . . .

V your work is always so beautiful & reflections endearing... I always stroll by when I want to get a full sense of the Ancestors.

This must be the week for Uncles, I posted about my Great Uncle Jake & have been reading other Uncle Tributes all week!:-)