When I get mine all figured out (see the chart and ahnentafel below) it does seem that my "dominant ethnicity or nationality" (based on my great-great-grandparents) is . . . American? . . . with a large helping of the South . . . and just a pinch of down Maine (via my maternal grandma and her ancestors).


One more generation back might take one branch across the big pond to France, but other than that, all known branches have been on American soil for several more generations, before connecting back mostly to England, with a few from France.


One line, Josephine #25, does appear (at this time) to connect waayyy back to the Kings and Queens of England and France and Ireland and Portugal and Scotland and Spain . . . and even if this potential royal connection winds up being untrue, it sure has been an interesting journey through history to look at these characters as potential ancestors, and real people, instead of just boring names on the pages of a history book. 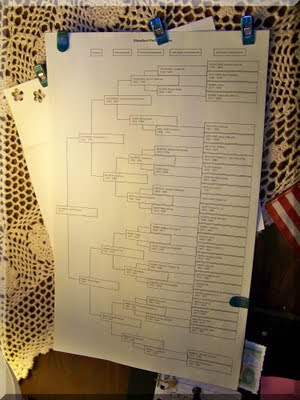 This 8.5 x 14 pale green Standard Pedigree Chart (generated by Family Tree Maker) hangs on the bookcase that sits one foot away from my computer perch (not actually a chair, but one of those ergonomic kneeling stool thingies) -- so this version of my ancestor list is always available as a quick reference. And my ahnentafel is on permanent display on one of my other sites (pre-blogspot days) -- gonetotexas.proboards.com. My great-great-grandparents from that ahnentafel (with their actual ahnentafel numbers) --

Posted by BeNotForgot at Saturday, August 08, 2009

Howdy
Thank you for the tip !
before we moved and downsized I had a place for my papers so I could see them.
I did not think to put them out again.
They are in a file box and assorted notebooks.
Thank you for all the wonderful information you share it is always a great motivator for me ,and I have needed the motivation !
Blessings to you and yours.
Have an awesome week.
Happy Trails

P.S.
Thank you for the birthday wishes :)