Upon looking at a calendar from the year 1691 it does appear that the following described "terrible last TUESDAY of September, 1691" was actually the 29th day of that September . . . and in looking around the internet, it was found that some other bloggers, et al are indeed using the 29th instead of the 28th as the date for this event . . . so the date on this blogpost was edited to reflect that info . . . the date was left "as is" in the quotes from historical documents . . . 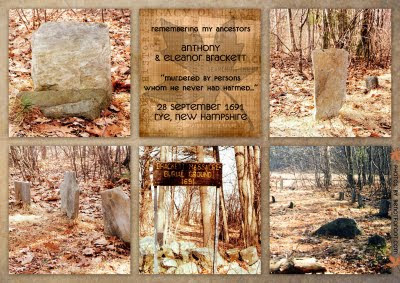 On that day were killed Anthony Brackett and his wife; also on that day were made captives two children of his son, John Brackett." H.I. Brackett, 1907.


According to the Brackett Genealogy published by H.I. Brackett in 1907, the following is one version of the attack that became known as The Brackett Massacre : —

The sons of Francis Rand went a fishing; the sons of ould Goodman Brackett were in the salt marsh and with no suspicion of danger. The settlers went about their usual vocations. Early in the afternoon a party of Indians came from the eastward in canoes, landed at Sandy Beach, left the garrison there unmolested, and attacked the homes of the defenseless ones, killing and capturing twenty-one persons.


Among the killed was Francis Rand, one of the first settlers. When his sons came in from fishing they followed the Indians over to Bracketts, fired upon them and frightened them away. The sons of Anthony Brackett who had the guns with them ran to the garrison at Odiorne's Point. . . .

The Keeper of this family history blog descends from Anthony & his wife by way of their son, Thomas Brackett, who had been killed in August of 1676 during King Philip's War. Another of their sons, Anthony, died two years before his parents, in September of 1689.


The full text of Brackett genealogy: descendants of Anthony Brackett of Portsmouth and Captain Richard Brackett of Braintree. With biographies of the immigrant fathers, their sons, and others of their posterity can be found > HERE < and is introduced by H. I. Brackett in the following manner : -

I have observed that old people live much in the past. As I grow older I find myself turning oftener to the days in the old home. I hear the patter and the prattle of childish feet and voice; light step of youth and maid; sober footfall and serious word of man and matron; the slowing step and failing voice of age. All, all are gone! I alone am left of . . .

The dear home faces whereupon
The fitful firelight paled and shown.
Hence forward, listen as I will
The voices of that hearth are still.
How strange it seems with so much gone
Of life and love to still live on.
Mrs. Silence J. Soule.


See also . . . The Brackett Massacre at cousin Heather's geneablog which is aka Nutfield Genealogy . . .

Oh....how moving. Thank you for sharing.

I loved your post and the pictures. What a sad story.

Thank you for sharing such a great story Vickie, it was very moving. It is wonderful that you have these family stories to share with us. And of course your collage of photos is wonderful as always. I love how you display and post about your family history.

How wonderful that you have an account of an event so far back. Thanks so much for sharing it!

I'm never an advocate of violence, but I think it's important to put this event in context. Wabanaki peoples were not committing random violence, although no doubt it seemed that way to the settlers. They were trying to defend their homeland which they were losing control of, including the natural resources that sustained them. It doesn't bring anyone back to life to understand that, but I think it honors their memory to understand more fully why it is that they died and how we can try to avoid repeating such misunderstandings in the future.

I was just here this week, and also at the site of John Locke's massacre down the coast a bit in Rye, NH. There was major flooding in this area this week, but both sites are OK as of now. The seawall was breached in Rye, but they are rebuilding it today. Both events took place as settlers were harvesting salt grass in remote areas outside of the communities. The one on Brackett Road is still remote. I hope to get out there later this weekend to check on the flooding.

Thanks for letting me know about that, Heather. I had heard on the news about flooding in New England, but had NOT paid attention to exactly where it was. The pictures I posted here were taken in March of 1998 . . . it snowed while we were there. Keep me updated. V.

Loved the post. How wonderful you have the story, albet it was sad, tells what they suffered.

Thank you for sharing. I am also a descendant and learning of this tragedy was very sad for me.

Hello I just wanted to say thank you for the story. I stumbled upon your web page while researching the death of a relative, Anthony Brackett in 1691. Regards, Scott Fischer

I am a descendant of Anthony Brackett and Eleanor. Your blog is very moving and respectful and very much appreciated. But I really have a problem showing a respect for the murderers who did this horrible act to innocents. Be aware of the facts - these were marauding bands on murderers spurred on by the French. Being afraid of losing your land is no justification for the utter cruelty demonstrated here. I cannot praise this blog enough - I feel it is gentle and calm and serene - much like the people - my people - that it tells the story of. I truly feel we owe these people something close to the truth.

I grew up framiliar with this story for, like many, Anthony is my ancestor. My grandmother (Birdeen Brackett) possessed many writings on this event. I appreciate the work you've done here, thank you.

Thank you, I also am a descendant of Anthony Brackett.