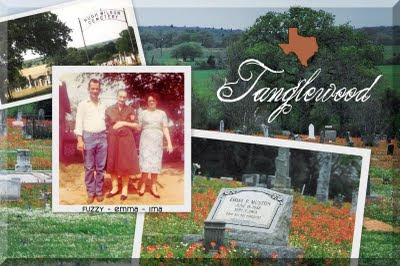 Forrest Lee -- aka Fuzzy -- is my dear Dad, and Ima is the grandma who lived right next door during my entire childhood . . . Ima never learned to drive (though I do have memories of my Dad trying to teach her), and she was widowed in 1957 . . . on Sunday afternoons (after church) we (being the entire family of Mom and Dad and us three girls) frequently took Grandma to Lexington to visit her mother, Emma, and other family members . . .

Funeral services for Mrs. Emma Patience Muston, 82, were held Tuesday [08 Sept 1964] at the Phillips & Luckey chapel in Rockdale. Burial was in the Tanglewood cemetery, with Rev. James M. Frazier, of the Methodist Church, Lexington, officiating. Mrs. Muston died Monday [07 Sept 1964] at the Richards hospital in Rockdale. For the past two and one-half years she had been in a Rockdale rest home. Most of her life was spent in the Cole Springs / Tanglewood community and in Lexington. She was born June 18, 1882, in Lee County, the daughter of Mr. and Mrs. Joseph H. Nettles. She was married to Charlie G. Muston, who preceded her in death when the children were young.

Posted by BeNotForgot at Monday, September 07, 2009

What an interesting piece of family history! Thank you for sharing!