1917 :: Resolution on Bowdry Passed by Veterans 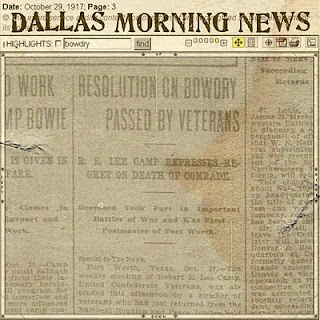 Dallas Morning News. October 29, 1917. Page 3. Special to the News. R.E. Lee Camp Expresses Regret on death of Comrade. Deceased Took Part in Important Battles of War and Was first Postmaster at Fort Worth.

Fort Worth, Texas. October 28. -- The weekly meeting of Robert E. Lee Camp, United Confederate Veterans, was attended this afternoon by a number of veterans who had just returned from the National Reunion and Peace Jubilee held last week at Vicksburg. The veterans praised very highly the cordial reception given them by the citizens of Vicksburg. Many of those who spoke were veterans of the historic Vicksburg campaign of the summer of 1863 and in their addresses they again lived over the stirring days of the war between the States. Special tribute was paid the soldiers now stationed at the training camp at Vicksburg by the returning veterans for the kind treatment the soldiers accorded them.
Captain George B. Holland, historian of the camp, announced that the Confederate Grays, an auxilliary of Lee camp, had subscribed for a Liberty bond. The purchase was made yesterday. Captain Holland also announced that he had bought three individual bonds which he had given to his grandchildren.

The following resolution on the death of P.J. Bowdry was unanimously adopted:


It becomes the painful duty of your undersigned committee to record the death of our late comrade, P.J. Bowdry, which occurred at his residence in this city on Oct. 23, 1917, after a lingering illness of long duration.


He was born in Missouri [sic, i.e., Kentucky] and was a prominent actor on the southern side of the Kansas border troubles before the war broke over us in 1861. Early in that year he enlisted at Albuquerque, N.M. in Company I, under Colonel Joe Shelby and followed the lead of that gallant Southerner who was soon promoted to the commande first of a brigade of Missouri cavalry, then to the command of a division under General Sterling Price in the Trans-Mississippi department. He was in all the prominent battles under General Shelby till the surrender at Shreveport, La., in the spring of 1865, among which were those at Lone Jack, Mo.; on Cowskin Prairie, and at Mark's Mills, Neosho, Mo. After which he was transferred to Gordon's regiment of cavalry, Jackson's brigade, when Shelby was promoted to the command of a division.


On the Fourth of July, 1863, his command, under General Holmes, made an unsuccessful attack on the Federals in their fort at Helena, Ark., in which he was severely wounded and was brought off the field by his comrade, Ed Bower, long time a resident of Dallas, until his death years ago.


Comrade Bowdry took up his abode in Fort Worth shortly after the war, when it was a mere hamlet, and shared in its growth to its present dimensions, and was for a time the first postmaster, after its incorporation in 1873. He was for many years an employee in one of the city departments, even to his death, and was ever an active and efficient servitor therein. He was one of the charter members of this camp and a constant attendant until the end.
Therefore, Be it resolved that in the death of our comrade we have lost a true comrade and deeply sympathize with his surviving relatives and friends in their affliction.

FYI . . . this Paschal Jefferson Bowdry is a 1st cousin to my 2nd great-grandpa, William Paschal Henry (1836-1912) . . . their mothers were sisters . . . and both boys were apparently named after their maternal uncle, Paschal Jefferson Kirtley, who took care of his younger sisters following the death of their parents while the girls were still quite young . . .