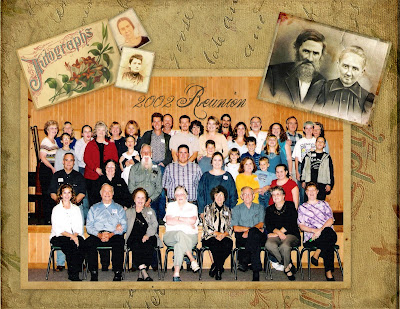 . . . there should be, in every life, a place
. . . where you could come and visit your past,
and the past of your people,
and know that whatever happened outside,
here timelessness lived.

A cozy room on a rainy Saturday in Rockdale was just that sort of gathering spot for assorted kith 'n kin of some early 19th century Milam Co. residents. As the family members arrived they were beckoned into the past of their people by a large display of their family history spread out on quilt-covered tables.

Here they read about how 17-year-old Josephine Wingfield Davis migrated c. 1859 with her family from Morgan Co., GA to Brazoria Co., TX (where she would marry William Paschal Henry in 1864). This time of change was the beginning of a new season for Josephine and her family -- for they left behind a way of life in a time and a place that has often been described as gone with the wind country.

An article about a Henry family reunion at the old Hamilton homeplace was published in The Rockdale Reporter in the autumn of 1931. It recorded the following about the arrival of Josephine and her family in the then-new town of Rockdale . . .

On Oct. 3, 1876, the Henrys arrived in Rockdale to visit a sister and family of Mrs. Henry's [Josephine], it being Dr. and Mrs. M. F. Anthony, who at that time had the post office and drug store combined on the corner where the Wolf Hotel now (1931) stands.


Of that time period The Galveston Weekly News reported that . . .

Every day or two some very interesting scenes occur in the pettifoggeries of Rockdale . . . there are street fights occurring almost every day . . . where a population of eighteen hundred now thrive, was ten months ago the home of the deer, and the pleasure ground of the black bear.


Twenty-three years later -- on Oct. 28, 1899 -- Josephine died a tragic death in an accident that was graphically described in 1899 issues of The Rockdale Reporter as well as The Rockdale Messenger. The Messenger article specifically mentions the grey mare that was pulling her buggy on that autumn afternoon when it collided with "a light spring wagon" as she drove "over the hill at the home of George Banzhaf."

Josephine apparently fell from her buggy "with her head between the left fore wheel of the buggy and shafts and was so held that her hair was wound around the buggy hub and spindle. . . . some young man met the buggy at the gate near the old Ferguson place, more than a half-mile this side of where the accident occurred. She was dead when found as her neck was broken."

The article concluded with the following -- "Brother [Wm. P.] Henry does not blame the drivers of the wagon for the accident but thinks they should have ascertained the results before driving home."

103 years after her death, Josephine and Wm. P. were well-represented in the most recent gathering that included descendants of three of their five children --


Descendants of Jerome & Sudie (Criswell) Henry and Emma (Henry) & Sam Sharp were not able to attend.

New to the reunion in 2002 were Esther (Hall) & John Biggers of Lake Jackson TX, and Susie (Deen) Hagler of Wills Point TX -- who were kin to the majority of those attending through their connection to Josephine's daughter-in-law, Berta (Sharp) Henry, as well as her son-in-law, Sam Houston Sharp, Jr. Berta and Sam were siblings from Houston Co. TX, and they married the Henry twins, Edgar and Emma.

Berta and Sam were grandchildren of Mahala (Roberts) Sharp Hall, who was a daughter of early Texas alcalde, Elisha Roberts. As alcalde, Roberts held court on the broad front gallery of his house; Sam Houston, James Bowie, David Crockett, William B. Travis, and Stephen F. Austin all boarded there. In 1833 Roberts was elected delegate to the convention in San Felipe.

One of Mahala's sisters was Matilda Connell Allen, whose first husband, John Connell, died in 1834 at Viesca, Milam Co. Matilda's second husband was Samuel Tabor Allen, who was a delegate from Milam (Viesca) to the Consultation of 1835, and also represented Milam in the House of Representatives of the 1st Congress, 1836-1837. Samuel was killed by Kickapoo Indians in 1838 in the Battle Creek Massacre. In 1850 Matilda donated 120 acres of the family estate to Bell County (created & organized from Milam in 1850) as the site for the new county seat -- now known as Belton.

More than 150 years later, kith & kin of these strong early Texas women -- this Mahala and Matilda and Josephine -- shared a noon meal that was "spread in picnic style." Afternoon activities including taking photos, concluding the silent auction, and giving prizes for --

The guessing games for the children were won by Madison Smith (candy) and Josh Landi (pennies).

Proceeds from the fund-raising efforts more than covered the expenses for the 2002 reunion. Top selling items included:

Posted by BeNotForgot at Tuesday, October 19, 2010

P.S. FYI . . . that's my beautiful Mom sitting 4th from the right on the bottom row . . . my youngest sister is just under the drop of the "R" in Reunion . . . my middle sister was not there when we did the photo . . . our baby brother is directly under the "i" in Reunion . . . and there is a whole assortment of nieces and nephews and aunts and uncles et al scattered throughout . . . I am the one sitting on the far left . . . I had just set the timer on my old Canon AE-1 and left it on the tripod while I hurried to make it into the shot . . .