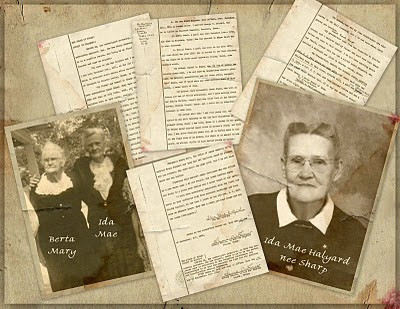 With much love and appreciation to Aunt Ida and cousin Stuart . . . and to cousin Esther in Lake Jackson . . .


The woman I knew as Aunt Ida was an older sister of my great-grandma, Berta Mary Henry nee Sharp (1873-1955) . . . so she is actually a great-grand-aunt. (Both Ida and Berta Mary are pictured in the collage on the left.) I do seem to remember going to East Texas to visit Aunt Ida when we were kids, but unfortunately I do not have any concrete memories of her.


It is said that it was someone in the Hall family who took the time and made the effort to arrange to record a 90-year-old Aunt Ida's memories of growing up on the Hall Plantation in Houston County, Texas. I am not sure why, but as far as I have been able to determine, not one of Berta Mary's descendants knew anything about this document, or about the stories of the Hall Plantation. I know my first knowledge of most of this information was through this 1962 deposition, which I first laid eyes on twelve years ago [1998]. Whoever did it, and for whatever reason, I am eternally grateful to my 2nd cousin once removed . . . Stuart Arlington Leaverton (1908-2001) . . . for sharing that document with me back in October of 1998 . . . exactly one month after his own 90th birthday.


Earlier this year [2010] I posted a tribute to our Mahala in which I talked extensively about that small packet of information shared by cousin Stuart. That small envelope contained the four pieces of paper referred to above, and shown in the collage. Each of the four is available for viewing as an individual page by clicking on the links below. Shortly after that post about our Mahala, I wrote of my very first hands-on encounter with the 150-year-old original of the 1860-1866 Journal of James Madison Hall (1819-1866). My very awareness of the existence of this Journal was also the result of receiving these four pages of typewritten paper. The notes in italics and [brackets] were added by me . . . the Keeper of this blog . . .

BEFORE ME, the undersigned authority, on this day personally appeared, Mrs. Ida Mae Sharp Halyard, known to me to be a credible person, who being by me duly sworn, deposes and says as follows:

My name is Ida Mae Halyard and I am 90 years of age. I was born November 3rd., 1871, on the old J. J. Hall Plantation, which is situated about twelve miles Northwest from the town of Crockett in Houston County, Texas, on Elkhart creek.


My father was Samuel H. Sharp and my mother was Mary Alexandrien Lamar [Lemaire] Sharp [my 2nd great-grandparents]. They were married but the one time and then on July 11th., 1861, and there were only six (6) children born to this union, namely:

Page 2 of 4 pages :: I was not aware of the little girl named Willie before I saw the following page . . . and this is the very first time I heard of our Mahala [my 3rd great-grandma] . . . investigating who Mahala was led me to her father, Elisha Roberts [my 4th great-grandpa] . . . who is mentioned in the pages of Texas history . . . according to the history records on her father, Mahala grew up with the likes of Sam Houston, James Bowie, David Crockett, William B. Travis, and Stephen F. Austin sitting around the dinner table . . . and further investigation into Mahala led me to the lady / cousin in Lake Jackson, Texas who introduced me to a photo of our Mahala as well as to James Madison Hall and his 1860-1866 Journal which makes frequent mention of an assortment of my kith 'n kin in its pages . . .

4. Ida Mae Sharp Halyard, this affiant, born November 3rd., 1871 as stated above. I married George W. Halyard, and he is buried in Glenwood [sic] Cemetery, Crockett, Texas.
5. Berta Sharp, a girl, was born November 10th., 1873, and died in Rockdale, Texas. She was married to Edgar Henry who is also deceased. [my great-grandparents . . . I was born on her 78th birthday]
6. Willie Sharp, a girl, was born in the year 1875, and died about the year 1885. She is buried in the Hall Cemetery on the Ramon de la Garza grant in Houston County, Texas, near Elkhart creek.

My father, Samuel H. Sharp (Sr.), was the son of Mahala Lee Roberts Sharp Hall. I do not know my Grandfather Sharp's given name. My paternal grandparents had one other child, Margaret 'Sis' Sharp, and if there were any more children born of this union, I never heard of them.


My mother, Mary Alexandren [sic] Lamar [Lemaire] Sharp, was born in France [sic] and was of French extraction, but I know nothing about her family history, except that she owned land on the Robeson Survey, Liberty County, Texas, and I still own my inherited interest in this land.


My mother died when I was four years old, and is buried in the Hall Cemetery on the old Hall Plantation on Elkhart Creek, where I was born. There is a marker at her grave. My father never married again again after my mother's death, and died when I was above fourteen years old. He is buried next to and on the right side of my mother, but there is no marker at his grave. My sister, Willie is also buried beside my mother.

Page 3 of 4 pages :: all of the information on the following page 3 was new to me . . . this was the first mention of James Madison Hall . . . I am now in the first year of what will be a seven-year journey with this man and his kith 'n kin . . . transcribing on a daily basis the entries from his now 150-year-old Journal . . .

My Grandmother [Mahala] and my step Grandfather [J.J. Hall] are also buried in the Hall Cemetery, but I do not know where their graves are located.


My Grandmother [Mahala] came from San Augustine to Houston County, and I believe that my father [Sam] and aunt were born there before she came to this County. I do not know anything about her family, except that she had a sister named Margaret, who married a McDonald and lived in Houston County, Texas.


My Grandmother, Mahala Lee Roberts Sharp, married Col. J. J. Hall about the year 1850, and there were only two children born to this union; Roberta Hall, a girl and Horace O. Hall, a boy. J. J. Hall had been married before and had a son named James Madison Hall. If he had any children except these three, I never heard of them.


Horace O. Hall married Florene Kirkpatrick when I was about eight years old, and brought her to the Hall Plantation to live. They are both now dead and are buried in Glenwood Cemetery.


Berta Hall, who was one and the same person as Roberta Hall, married John Downes about the same time her brother married, but she and Downes did not live together very long. She then married Marcus M. Halyard, my husband's uncle, and moved away from Houston County in about the year 1902.


James Madison Hall married my Aunt Margaret Sharp about the year 1860, but he died before I can remember [1866] and left Aunt Margaret with one child, named Florence.

Margaret Sharp Hall, the widow of James Madison Hall, married Frank Stewart and they had two children named Ed Stewart and Lou Stewart. She died about the year 1878, but I do not know where she was buried.


Florence Hall married James Christian who was killed by a man whose name I do not recall. She later married again and moved to a place near Dallas and I never heard of her again.


I have been personally acquainted with the facts set forth in this affidavit both from personal knowledge and from family history. At one time I lived in the old Col. J. J Hall home on Elkhart Creek. This was a story and half house and had two large fire-places."


(Signed by Dennis C. Frazier) Notary Public, in and for Houston County, Texas.


THE STATE OF TEXAS
COUNTY OF HOUSTON


BEFORE ME, the undersigned authority, on this day personally appeared, Ida Mae Halyard, known to me to be the person whose name is subscribed to the foregoing instrument, and acknowledged to me that she executed the same for the purposes and consideration therein expressed. GIVEN under my hand and seal of office, this the 13 day of September, A.D. 1962.


(Signed by Dennis C. Frazier) Notary Public, in and for Houston County, Texas." 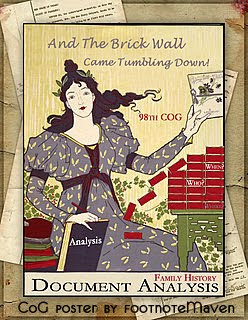 This blogpost was prepared for the 98th edition of the Carnival of Genealogy . . . hosted by Jasia at Creative Gene . . . who asked us to discuss a document that helped us break down a brick wall on your family tree . . . and to discuss the information that appears on the document and how it contributes to your family history . . . poster courtesy of footnoteMaven . . .

Holy cow. That's pretty much a wrecking ball to the ol' brick wall right there.

I wonder what the deposition was for?

Very cool. I remember your post about Mahala. This was a great document!

Very impressive. I'd say the brick wall has come down and been cleaned up.

That sounds so exciting for you - and you wrote it up so nicely. Thank you for sharing!