There's One in Every Family . . . somewhere in the family tree, every family has at least one . . . that extra-special aunt or uncle . . . the childless aunt who raised her sister's fatherless child . . . the uncle who made the merry-go-round that is still a favorite part of childhood memories . . . the unmarried aunt who stayed home to care for her widowed mother . . . the newly married uncle who assumed guardianship for his orphaned younger sisters . . .

And 150 years ago in Oktibbeha County, Mississippi . . . as this country teetered on the edge of a deep chasm that would someday be referred to as the Civil War . . . 8-year-old Mary Annie "Mollie" West was on the verge of becoming dependent on a very special aunt and uncle for her very safety and well-being . . . 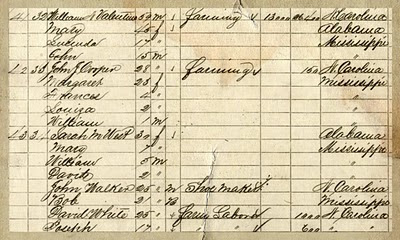 On the 27th day of November in the year 1860 . . . Mollie's Aunt Mary and Uncle Bill were observing the 26th anniversary of the date when a then 20-year-old Mary became the bride of a 33-year-old widower by the name of William Noel Valentine (aka Uncle Bill) . . .

Aunt Mary . . . aka Mary F. Valentine nee Carter . . . was an older sister to little Mollie's (widowed?) Mother, Sarah West nee Carter . . . and and on the 1860 census for Starkville, Oktibbeha County, Mississippi, Mollie (i.e., Mary) and her family are near-neighbors to this Aunt Mary and Uncle Bill . . .


During the years of the war between the states, Mollie's immediate family members often sought shelter with this Aunt Mary and Uncle Bill, who lived in a home of six rooms, a long wide hall, two large porches and a portico in front of Mary's room. Mollie said she spent many pleasant hours in their well-stocked library, where losing herself in books allowed her to briefly escape from the harsh realities of those years.


In later years, Mollie would say of this safe-haven that, "There was also a large cellar under the house with two huge boxes in it that held apples from the orchard across the road from the house. I can see and smell those blossoms yet when Spring comes each year! The house was surrounded by a picket fence that enclosed a large yard. The walk from the front yard gate to the house was lined with jonquils, daffodils and snowdrops. The house itself was white, set on brick pillars. So it was a pleasure to be there out of our little cramped home."


The following links will take you to more information on these and other families in and around Oktibbeha County, Mississippi during the years of the war between the states :- 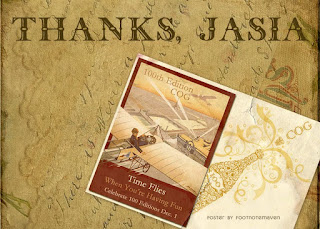 This blogpost was prepared in honor of all of those special aunts and uncles in the family tree . . . and in celebration the 100th edition of the Carnival of Genealogy over at Creative Gene . . . where the geneablogger known as Jasia just recently celebrated her 5th Anniversary as the Keeper of that blog. Thanks for being a part of our geneablogging world, Jasia!

Thank you, Vickie, for your very kind remarks and your terrific article for COG 100!