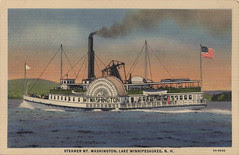 When I saw that the theme for the premier issue of A Festival of Postcards was Wheels, I immediately knew I wanted to showcase the 19th-century steam side-wheeler, Mt. Washington, whose huge paddle wheels were driven by a single-cylinder steam engine. Unfortunately, I am unable at this time to locate the originals of my Mt. Washington postcards, so I am using available scanned images from the internet of a few similar postcards.

The paddlesteamer Mount Washington, named after the highest of New Hampshire's White Mountains, was launched in spring 1872 to carry mail, goods, and passengers on Lake Winnipesaukee, under the flag of the Boston and Maine Railroad. With a hull length of 178 feet (54 m) and a beam of 49 feet (15 m) she appeared as a typical representative of the North American sidewheelers around the second half of the century and was the largest steamer on the lake at that time. The huge paddle wheels were driven by a single-cylinder steam engine of 450 hp (340 kW) at approximately 26 rpm. The power was transferred from the vertical single cylinder to the wheel shaft by the walking beam, high above the upper deck, oscillating in the frequency of the paddle wheels. Known as "The Mount", her kitchen and restaurant service became famous. 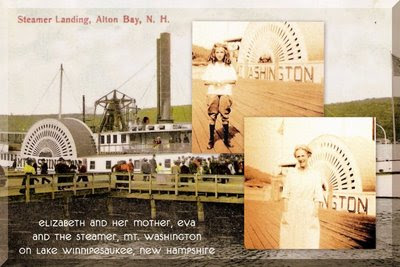 The last time Mom and I traveled to New England was in March of 1998. While visiting in the home of Mom's 1st cousin, Margie, in Lynn, Massachusetts, I used my Canon AE-1 to preserve images of the pages of a family scrapbook. These two snapshots of Mom's mother, Elizabeth, and Elizabeth's mother, Eva, were amongst the faces glued to the typical black paper pages of that album. Because we can see the Mt. Washington in the background, we know that Elizabeth and Eva are on the dock somewhere on Lake Winnipesaukee -- possibly Alton Bay. . . . 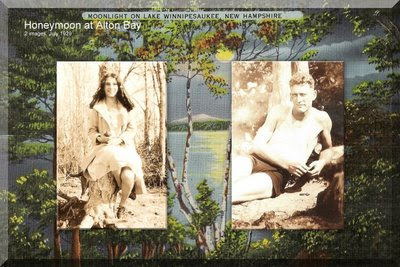 Elizabeth was out picking up pawpaws with her childhood friend, Diantha, when they met their future husbands. When Elizabeth married her handsome cowboy / sailor from Texas in July of 1929, they honeymooned at Lake Winnipesaukee. In 1978, Diantha wrote the following to my Mom --


I had forgotten about Alton Bay. Betty* & I went up with her mother & stayed in the cottage one week end. I too have since been back to try to locate the cottage. I had forgotten that that was where they honeymooned . . . Win died in Nov. 1940 - I wonder did your father ever know? As I said we did have a postcard that you'd all gone to Texas - and I can recolect no further word. . . . *Betty aka Elizabeth

The above postcards and postcard collages -- with a wheels-theme -- were posted for the 20th May 2009 inaugural edition of A Festival of Postcards which is hosted by Evelyn Yvonne Theriault who lives near Montreal, Quebec, Canada. Make sure you check out her delightful blog.

Hello
Thank you for this fabulous postcard and all the amazing backgroun information.
I enjoy how you weave things together.
Blessings of joy to you.

Thanks, Terry. I started working on this last night and got too sleepy, so I quit, figuring I would quickly finish it this a.m. Turned into an all-day project -- I kept finding too much good info! I REALLY trimmed it down for this post.

I would never have thought of using a steamer with its wheel. A great postcard.
Judy

I know Lake Winnipesaukee well and this is an interesting peice of your family history.

Great collection of postcards you have happening here.

Greetings to Les & Judy & Pearl! Glad y'all stopped by. Les, glad you commented -- it reminded me to send you that email that was sitting in my drafts folder. Judy, I got lucky -- the idea just popped into my head! Pearl, according to your profile, you are rather a long distance from Lake Winni now!

You are one creative woman!

I so enjoy your blog. And this submission to the Festival was fan-tastic!

Absolutely great! The side-wheeler is beautiful and so are your creations. Thanks for the history.

Superb post! I have mainly modern postcards in my collection, but one is of the Tall Stacks, Cincinnati.