The Package of Old Letters 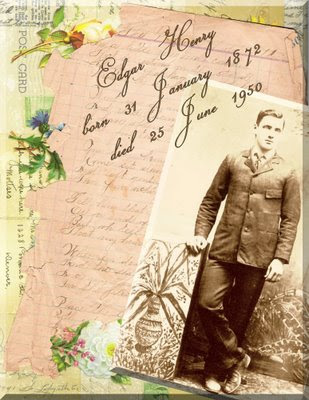 
Edgar and Berta set up housekeeping in Milam County where Edgar's parents lived until their deaths (1899 and 1912) . . . they then moved to West Texas for a while early in the 20th century, but returned to Rockdale ca. 1939 shortly after two of their grandchildren moved in with them on a permanent basis . . . Edgar and Berta both died in Rockdale, and were laid to rest at Oaklawn Cemetery . . . Edgar is the paternal great-grandpa of the Keeper of this family history blog . . . a goodly number of Edgar and Berta's descendants still live in Rockdale and Milam County at this time, and others from across the state sometimes return to Milam County in the Autumn of the year for a family reunion . . .

FYI . . . the above collage was created by very carefully placing a torn and crumbling ledger page on a flat-bed scanner . . . and then layering on top of it a floral file folder from a local discount store . . . those two items were scanned together as one image . . . then using Picasa . . . that image was cropped . . . a second collage was created by adding the photo of Edgar . . . the text was also added using Picasa . . .


That fragile handwritten page came from a ledger belonging to Edgar Henry, and contains lyrics to old folk songs . . . this particular page contains a version of a set of lyrics to a song called The Package of Old Letters . . . as you can see, part of this page is missing, so I'm guessing at the closing lines, but here are the words I think my great-grandpa penned on these pages . . .


In a little rosewood casket
That is resting on the stand
There's a package of old letters
Written by a cherished hand
Won't you go and get them, Sister
And read them o'er to me
I have often tried to read them
But for tears I could not see

Place the letters and the locket
Both together on my heart
And the little ring he gave me
Never from my finger part.

Posted by BeNotForgot at Saturday, January 31, 2009

Your collage is beautiful, and what a wonderful treasure that piece of ledger paper is with his handwriting...priceless.

Thank you so much for sharing how you created this lovely image! As soon as I saw it I immediately thought, "Now how DID she do that?" I was so glad to see the answer at the end of your post :-)

What a wonderful legacy! How amazing that you are able to preserve this poem, and his handwriting so beautifully. Thank you for sharing, and happy PFF!

fabulous collage! you have a great talent!
happy PFF
xx

I love your creativity and talent. This piece came out so beautiful. I too thought, how did she do that, thank you for sharing how you put this together, I may try something similar without copying! Thank you...

Thank you for sharing the beautiful story and verse with us, as well as how you created the unique and lovely collage.

What a beautiful collage. It's so nice that you have things like that and can create art with the vintage pieces. Bravo!

Your collages are terrific! By the way, 1950 is also the year my great-grandfather died. He had been born in Georgia, but came to Rockdale in 1884 at age ten. He lived in Milam County for sixty years before moving to Midland in about 1944.