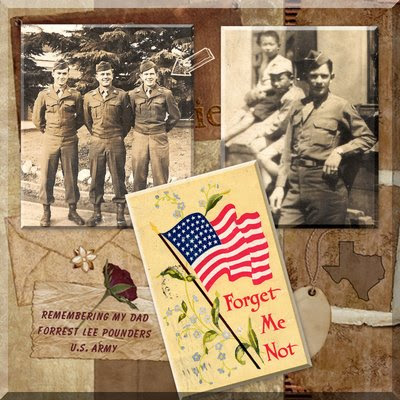 Fifty years to the day before his death on 17 January 1996, a form letter was being prepared for then 18-year-old FORREST LEE POUNDERS of Rockdale, Texas. That form letter, dated & mailed 17 Jan 1946, was an Order to Report for Induction, & it was signed by M. N. Stricker, representing Local Board No. 1, Milam County. The letter read, in part, as follows.


Having submitted yourself to a local board composed of your neighbors for the purpose of determining your availability for training & service in the land or naval forces of the United States, you are hereby notified that you have now been selected for training & service therein. You will, therefore, report to the local board named above at City hall, Rockdale, Texas at 1:30 p.m., on the 3rd day of February, 1946.

POUNDERS (aka Fuzzy) was inducted into the U.S. Army on 04 Feb 1946. Six months later, at Fort Monmouth, New Jersey, he received an Honorable discharge for C of G to enlist in the Regular Army. His mustering out pay was $200.


One year later, POUNDERS received his second Honorable Discharge at Camp Stoneman, California. At the time of his separation, his Military Occupational Specialty & No. was Message Center Clerk 667. He received a World War II Victory Medal as well as an Army of Occupation Medal - Japan. His mustering out pay was $100.

His Report of Separation indicated that POUNDERS had attended Signal Corps School while at Fort Monmouth, New Jersey, as well as Message Center School in Kokura, Kyushu, Japan. This same report listed his prior employment at Jones Grocery & Market in Rockdale in 1945.

Posted by BeNotForgot at Saturday, January 17, 2009

What a nice way to remember your dad!

I salute you father and his amazing service! This collage is such a gorgeous tribute to him! I found myself smiling right back at the trio:) The information that you added makes it all so fascinating and special! Bravo!

You are quite a talented scrapper too. Is this digital or hybrid? Happy PFF!

I like the postcard and collage. I have some photos of my father in uniform but I never learned exactly what he did in the Army. He was stationed in the southern U.S. during WWII.

Thank y'all for stopping by! I do luv the attitude my Dad is displaying here.

Marie, I usually start with a premade background of some sort and then layer on my photos, postcards, text, dingbats, special effects, or whatever using Picasa (free download). I also do some image editing with IrfanView (free download).

Postcardy, the info on my Dad came from papers in his files, plus some research on the internet. I recently requested the military papers for my maternal grandpa who was in the U.S. Navy 1927-1931 -- you might want to try that for your father. One of my aunts had his discharge papers, and that provided the info I needed to request his papers. Requires patience . . . been about 2 months now, and still waiting . . .

How very interesting. I just recently took a family vacation with my parents and at some point my sisters and I started asking my Dad about his time in the service. He's never talked much about it before (even though he stayed in the US the whole time) so it was wonderful to get that information.

Hi
What a wonderful tribute .
This is such an amazing post.
Thank you for sharing.
I wish I could get my Dad to talk.
I'll have to keep trying :)
Have a blessed weekend.
Happy Trails

SO beautiful amd such a wonderful tribute. Thanks for sharing.
debby

What a beautiful postcard! And such a thoughtful tribute. I'm sorry I'm so late to drop by for PFF! I've been ill all weekend. Today I actually feel human enough to say, Happy PFF!

A beautiful tribute to your dad Vickie, I can feel your "missing" him deeply. What wonderful memories you have of him always.

Thank you for sharing those memories with your beautiful signature collages.