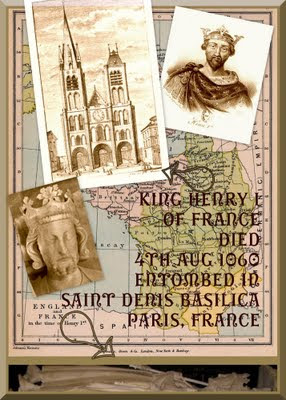 This King Henry is currently believed to be a 26th great-grandpa of our Josephine (1842-1899), who is a 2nd great-grandma to the Keeper of this blog.

St-Denis Basilica houses the remains of kings, queens and royal children, as well as those of leading personalities who served the French court. It is possible to date most monuments simply from their appearance, thus they serve as a chronological chart of French funeral art through the Middle Ages and into the Renaissance. Up to the Renaissance, the only sculpture to adorn tombs was in the form of recumbent figures. . . . Around 1260 St. Louis commissioned a series of effigies of all the rulers who had preceded him since the 7th century. The figures were mere allegories but they provide a telling example of how royalty was portrayed towards the mid-13th century. . . .


P.S. If you have not read Ken Follett's Pillars of the Earth, I highly recommend it if you are interested in reading a historical novel that just happens to tell how the early Gothic cathedrals might have been constructed.