Although I have yet to make any Irish connections for my maternal grandma Elizabeth, who is featured in this collage wearing her "Irish dancing costume," I have found a few connections to Ireland amongst the ancestors of the man that Elizabeth married -- Robert E. Henry (1905-1976) -- aka Grandpa Henry, e.g. . . . John Early . . . William Early . . . John Porter and Mary (Anthony) Porter . . . and, although he was not born in Ireland, our Sir Anthony St. Leger was involved in the history of Ireland. . . . 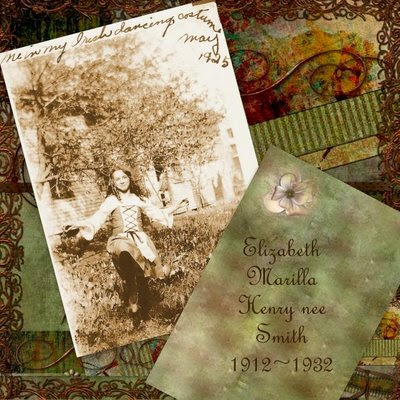 May the earth be soft under you
when you rest upon it,
tired at the end of the day.
May the earth rest so lightly over you
when at the last you lie under it
that your spirit may be
out from under it quickly
and up, and off,
and on its way to God.
~*~*~*~*~*~*~*~*~*~*~
Update 17 March 2022 :: Biddeford Daily Journal, Biddeford, Maine, Tuesday Evening, Apri 29, 1924, Page Six, 3rd column . . . "Juvenile Ball at Old Orchard Grand Success. Audience Taxed Capacity of Town Hall -- Fine Programme was Enjoyed. . . . ELIZABETH SMITH and Gladys Goodrich, charming in green and white costume, came next with an 'Irish Folk Dance' that made one think they were right from Erin. Their dancing was in perfect time and seemingly done with no effort, and they deserve much credit for their wonderful stage presence."

I absolutely love your grandmother's Irish dancing dress. So glad you shared it on St. Patrick's Day!

Thank you, Lisa and Judy. I do so enjoy the "feel" of this photo of our Elizabeth.