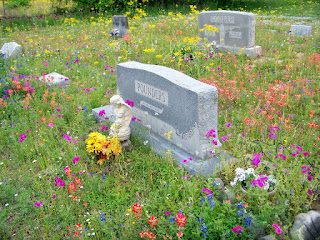 On Saturday, March 20th, 1999, the sun rose at 6:32 a.m. A short time later, as that sun continued to rise steadily over the fields of Texas wildflowers and peeked through the east-facing window of Room 203 at Richards Memorial Hospital in Rockdale, Ima Lois Pounders nee Muston breathed her final raspy breath here on this earth.


According to the UT-McDonald Observatory, the sun seldom rises precisely in the east or sets precisely in the west. But on this, the day of Grandma's final Homegoing, the sun rose due east and set due west, because this day was the vernal equinox ~ the beginning of spring in the northern hemisphere.


The following information was printed in the memorial bulletin which was distributed at Grandma's memorial service. It is downright impossible to condense nearly a century of living into a four-page leaflet, but this serves as a very brief summary of my Grandmother's life.


THE YEAR WAS 1906. And . . . the President of the United States was Theodore "Teddy" Roosevelt. O'Henry's The Gift of the Magi was published. School Days & Anchors Aweigh were popular songs. Shirtwaist dresses were in fashion. And . . . the second of seven daughters was born to Charlie and Emma Patience (Nettles) Muston at their home in rural Lee County, Texas. Charlie and Emma named their new baby girl Ima Lois. Over the next ten years, Ima and her big sister, Erma, would be joined by Mollie, Stella, Nona, Gladys and Pauline.


YOUTH. Charlie and Emma and their seven little girls were living in Wharton County, Texas in 1915 when Charlie died. Ima was nine years old at the time. Emma and her seven young daughters returned to Lee County to be near Emma's widowed mother, Mollie, at Cole Springs. They made that journey home in a wagon which was pulled by a gray mule named "Jack" and a gray horse named "Bill". A cousin would later state that, "...I can yet visualize the old log house down the slope and the house across the swale where the widowed Aunt Emma Muston resided with her daughters." When Ima spoke of her youth, she remembered the good times as well as the hard times. There were her Grandma Nettles' cookies, trips into town on Saturday, dances in the homes of friends and neighbors, church services under the brush arbor, Sunday dinners, and many, many more.


OTHER. Ima spent many hours crocheting while sitting in her favorite chair by the window in a corner of her kitchen. She enjoyed working with multicolored threads which were as varied as the colors of the flowers she delighted in growing in her yard. Five of Ima's crocheted doilies were incorporated as nosegays in the family spray which was placed on her casket. That same floral display also featured mock orange, english ivy and bridal wreath from Ima's yard.


As a young girl, Ima attended the Cole Springs Baptist Church in rural Lee County. After moving to Rockdale, she became a faithful supporter of the First Christian Church. Ima was employed by Linwood Mehaffey for over 50 years. Her friendship with the Mehaffey's continued until her death. 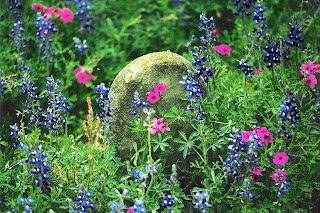 DEATH. Ima made her final journey "Home" on the first day of spring in the year of our Lord, nineteen hundred and ninety-nine. Her earthly remains were laid to rest beside her husband and their two sons in the Hugh Wilson Cemetery in Tanglewood. On the day of Ima's funeral, the cemetery was covered with bluebonnets, wild phlox and Indian paintbrushes. It is the same country cemetery where Ima's mother, her maternal grandparents, as well as numerous other kith and kin are buried. Ima's Page at Find-a-Grave