They were there for each other 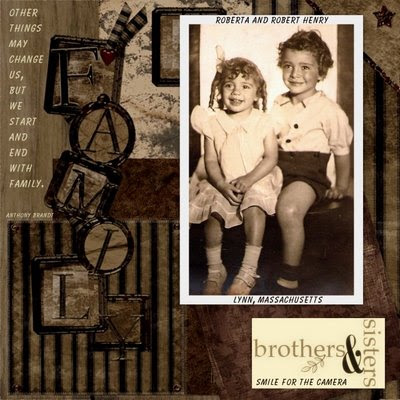 Other things may change us, but we start and end with family.

This is an undated photo of my mother, Roberta, and her brother, Robert, Jr., who were born in Massachusetts in 1932 and 1930 respectively.

Their 19-year-old mother, Elizabeth, died three days following Roberta's birth, and the children lived with their father, Robert, Sr., and maternal grandma, Eva, until their father remarried late in 1934.

By 1940, Robert and Roberta were living in Texas with their paternal grandparents, Edgar and Berta Mary, and there they stayed until they finished school and went out into the world.

Robert, Jr., like his father before him, joined the Navy, and then spent his entire life looking for something to fill the emptiness inside him.

Roberta married her knight in shining armor -- whom she first spotted when he rode horseback by the home she shared with her grandparents -- and together they raised four children.

Robert, Jr. returned to the state of his birth only once -- that being the year following the death of his father -- when he accompanied myself and my mom to New England. We took photos of the house in Massachusetts where Robert and Roberta were born, and where their Mother died. In Maine, we snapped shots of the family home where Elizabeth spent her childhood, and where her father took his own life in 1920.

And tears were shed in the autumn of that year as we stood beside the unmarked grave of the eternally-19-year-old Elizabeth . . . on what would have been her 65th birthday . . . tears for Elizabeth, whose life was cut so short . . . and tears for the children who were deprived of their Mother's love . . .

This "Brothers & Sisters" photo collage and story was prepared for the 11th edition of "Smile for the Camera."

What a beautiful story and a precious picture of your mom and her brother.

Thank you, Debbie. They just appear to be glowing with happiness in this image, and that is somehow comforting to me.

You have written such a touching story of their childhood and their growth into adults. Thank you so much for sharing the happiness, pain, and tears.

Thank you for your input, Judy. Roberta turned out to be an amazing Mom -- MINE -- and she's still going strong at 77!

I always admire your electronic scrapbooking - it is electronic?
This summer when I have more spare time I'm definitely get into this!
Evelyn in Montreal

Thank you, Evelyn. I guess my "collages" are somewhat similar to what I've heard referred to as "digital scrapbooking" . . . except all I use is a free program called "Picasa" . . . I'm sure there are better ways of doing this!