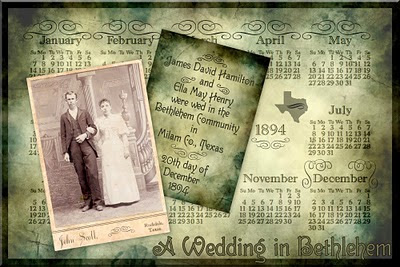 A copy of the following newspaper article turned up in my files -- source unknown. I assume it probably came from my 1st cousin once removed, Georgia Faye (Henry) Kaseberg (1925-2001), as she was always so good about giving me copies of whatever finds she made.


Once more I come, heralding the news from old Bethlehem. Since my departure it seems that marriage bells have been substituted for [Christ]mas bells. I have attended weddings for the past two weeks and still have several invitations left.


Last Thursday night [i.e., 20th December 1894] both young and old began to congregate at the residence of Mr. and Mrs. W.P. Henry Sr., [my 2nd great-grandparents] for the purpose of witnessing the marriage ceremony between J.D. Hamilton and their daughter, Ella, conducted by Hon. W.D. Wells of Rockdale, with J.B. Henry and Miss Cornelia Bowling, Hubert Phillips and Miss Elma Rettig as attendants.
After which the entire crowd was ushered into the dining room, where they partook of a most wonderful, excellent and appetizing repast.
Well Mr. Editor, as I have an invitation to attend a wedding at Mr. and Mrs. Thos. Phillips, I will close by giving a list of presents. Enclosed please find some of the wedding cake.
The presents were as follows:


Posted by BeNotForgot at Wednesday, December 23, 2009