They are the roses in December;
you remember some one said
that God gave us memory
so that we might have roses in December. . . .
the people I have cared for most
and who have seemed most worth caring for
-- my December roses --
have been very simple folk.
~ James M. Barrie ~

Fourteen years ago [1996] I had not yet bought my 1st computer. The pages I typed during my Father's last days, and following his death -- e.g., the page shown here -- were done on a portable typewriter.

It was December 1996, our first Christmas season without the patriarch of our family, Forrest Lee Pounders (1927-1996). It had been almost a year since Dad died in January . . .

On that cool, crisp Christmas morning, we drove to the little country cemetery to visit Dad's grave. Mom had planted antique rosebushes shortly after Dad's death -- The Fairy rose -- which was introduced by J. A. Bentall in England in 1932 (the year of Mom's birth) -- and I wanted to gather some flowers for drying for the special project shown here. The delicate rose blossoms and tiny rosebuds sparkled with frost that morning -- as if sprinkled with stardust from the Star of the East. 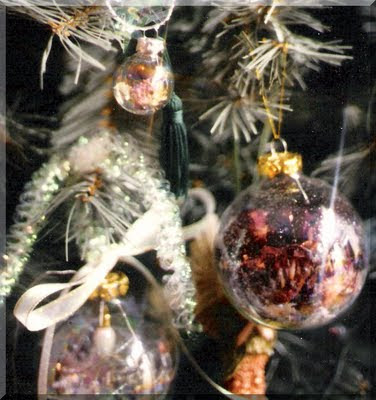 You have collected all my tears and preserved them in Your bottle! You have recorded every one in Your book. ~ Psalm 56 ~

I refer to the family keepsake ornaments shown here as tearbottles. These opalescent glass globes contain dried rose petals from Daddy's memorial service, as well as the dried roses from his grave. The sweetly scented blossoms are combined with a sentimental mixture of rosemary (for remembrance) and wormwood (for sorrow). And all are nestled in a soft bed of prisma stardust blended with glittering ice crystals . . .

Silently one by one
in the infinite meadows of Heaven
blossom the lovely stars
the forget-me-nots of the angels.
~ Henry Wadsworth Longfellow ~

Posted by BeNotForgot at Thursday, December 03, 2009

What a lovely way to remember your dad!

So very beautiful. My heart was in my throat as I read your Christmas tribute to your dad --- and it is a tribute to you and your mother as well. The ornament is lovely.

What a beautiful way to save memories! I am really enjoying your site.

Aunt Vickie I have never seen some of this stuff about G-pa until now, I'm sitting here in tears after reading all of this. I miss him still every day. I'm glad you sent me this link. Love ya bunches! Em

Love these ornaments - what a wonderful way to remember your Dad every Christmas. I lost mine only last December 21st. Makes the holidays a bit tough this year. Thanks for sharing

Oh, these are lovely. I lost my dad a few months ago and I think I'll make some of these. I love that passage of scripture, very meaningful to me.